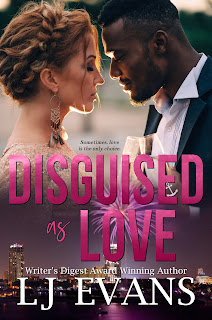 Note: An advance reader copy (ARC) was provided by the author.
Disguised as Love as the third, and I do believe final (but I could be totally wrong, so don't take my word for it!), novel in LJ Evans's Anchor Suspense series, which is an offshoot of her Anchor series. This is Raisa Leskov and Cruz Malone's story, both of whom were introduced earlier in the series. She's a scientist who is the epitome of beauty with a brain, and he's an undercover agent who has spent years building a case against a Russian crime family--the Leskovs. She's made a point of keeping her distance from her family's criminal enterprise, and he's made every effort to not notice the one woman he should not want. When Raisa is called back to Russia, Cruz's instinct is to protect her, even more so than he would anyone else. As everything begins to unravel and lines are crossed, Raisa and Cruz will have to face truths and lies and determine which is which while also trying to figure out if what they feel for one another is worth putting everything on the line.
Goodness but how addictive this series has turned out to be! LJ Evans has mastered the art of writing romantic suspense, and readers like me are happily and greedily reaping the benefits. Finally getting Raisa and Cruz's story and falling in love right alongside them felt like a reward for my patience to get my grabby hands on this book. If there was one couple that so deserved the hashtag "complicated", it had to be these two, but then that simply made that happily-ever-after of theirs even more deserved. One of my favorite things about Evans's writing is that she makes the characters themselves worth emotionally investing in. You want to see them grow and evolve as individuals just as much as you want to see their relationship as a couple develop and strengthen. If you're a fan of not just romantic suspense reads but also excellent storytelling, look no further than the Anchor Suspense series. Disguised as Love receives five out of five stars.
Release Date: 22 April 2022
Date Read: 18 April 2022
Learn more about LJ Evans.
Purchase Disguised as Love on Amazon.