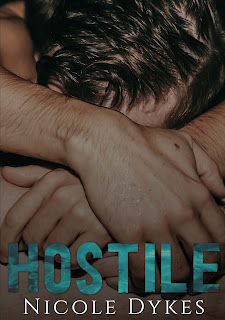 Note: An advance reader copy (ARC) was provided by the author via The Hatters Author Services.
Nicole Dykes is back with her newest standalone! Hostile is an M/M new adult romance and features two seemingly opposite main characters who may actually have more in common than they may have first assumed. At eighteen, Rhett has a life that he didn't think possible five years ago. He has the Moores--now his parents who adopted him at thirteen--and his best friends are his siblings, what with having been adopted alongside him. He lives in a big house and attends a private school. But he still feels...lost. As grateful as he is for what he has, he doesn't feel he deserves any of it. He's also got a secret, one that he is neither ready nor willing to share just yet. But Grayson Lancaster, the school's golden boy born with a silver spoon in his mouth and who couldn't possibly have anything in common with him, could turn out to be the one person who gets who he is and what he's hiding.
Ever since I discovered her writing last year, Nicole Dykes has become one of my auto-read authors. Now, I've still got to work on her back list, and fingers crossed that I'll actually have more free time to do so, but as for her current stuff, I've enjoyed what's crossed my Kindle app since Immoral. Rhett (whose last name I don't recall being mentioned, unless I totally missed it!) and Grayson's story was both heartrending and hopeful. They were both multi-layered and complex main characters, maybe Rhett more so than Grayson. I seriously wanted to give them both comforting hugs because to be eighteen and have all that angst and anxiety weighing you down is sadly more prevalent than we'd care to admit. Rhett's adoptive parents, Rhys and Blair Moore, were inspiring, and now, I've added their book, Clarity, to my to-be-read list. From start to finish, Hostile moved me and gets 4.5 stars.
Date Read: 04 April 2022
Learn more about Nicole Dykes.
Purchase Hostile on Amazon.