Review: Worth the Chase by J.D. Hollyfield 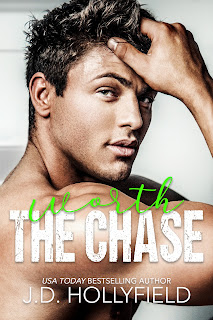 Note: An advance reader copy (ARC) was provided by the author via Wildfire Marketing Solutions.
Worth the Chase is the newest release from bestselling author J.D. Hollyfield. It is a companion novel to Chicks, Man, which was published in 2020, but it can absolutely be read as a standalone. The book is about Chase Steinberg, who is quite disgusted over the fact that two of his closest friends have settled down with their respective women. His other friend may still be single like him, but he's become pretty useless as well. Chase refuses to fall into the same trap. He will never allow himself to be tied down to any woman. He's happy sticking to one-night stands, which is what he thought was going to happen with the gorgeous woman he nicknames Angel. But from the get-go, there was something special about her, and he knows he wants more than one night. So, imagine his disappoint when she leaves without bothering to say goodbye to him. Fate, however, seems to work in his favor because he sees her again, only now, he learns that her name is Bridget Matthews and that she just happens to be his best friend's cousin. But while Chase hopes for more, Bridget has nothing left to offer any man.
Chicks, Man was a really great read, so Worth the Chase had some chasing (pun, though corny, intended!) to do. Chase and Bridget's story did not disappoint, giving Levi and Hannah a run (get it--run and chase?) for their money. I laughed my heart out, especially when it came to Chase, the unapologetic commitment-phobe, trying to come to terms with the fact that he was developing feelings (gasp!) for Bridget and doing anything and everything in order to show her how much he wanted to be with her. As for Bridget, I loved that she was independent and fiery, taking a stand when necessary and refusing to bow down to anyone. While there was a lot of romance and humor, there was a touch of angst present as well. Both Chase and Bridget have romantic pasts that have impacted them. I'm still curious as to whether Kip and Stacey have already had their own book, and I'm now looking forward to reading Ben's story sometime soon! As for Chase and Bridget's romance, well, this delightful romantic comedy is worth 4.5 stars!
Date Read: 05 April 2022
Learn more about J.D. Hollyfield.
Purchase Worth the Chase on Amazon | Apple Books | B&N | Kobo.