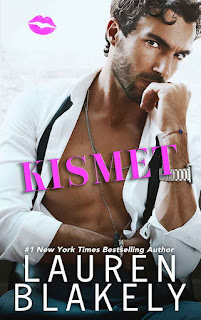 Note: An advance reader copy (ARC) was provided by the author.
Kismet is the third novel and fourth release in the Happy Endings series penned by Lauren Blakely. This is the story of Josephine Brennan, thirty-two and happily living her best life in New York with her circle of closest friends. She's THIS close to getting the promotion that she knows she deserves. Luckily, her boss agrees. Unfortunately, in order for her to continue to be on track for said promotion, she needs to move to London since the auction house she works for has just been bought by a rival auction house. She once vowed she would never return to London, but that promotion is one she's been working towards for too long. Her friends suggest she hooks up with someone once she's across the pond, and Jo does exactly that. Of course, she had no idea that her one-night stand would turn out to be forty-year-old Heath Graham, a co-worker and someone who's also up for a promotion--the very same promotion she's set her sights on. They agree to keep things professional, but the more time they spend together, the more their attraction grows. Could this all be kismet or will Jo kiss her dreams goodbye?
This was another good addition to Lauren Blakely's Happy Endings series. Released as an Audible Original back in February, I have no idea if there were any changes made now that the story has been published in eBook and paperback. No matter since I'm basing my review on the edition that I had in my hands, and what an enjoyable read it was. Jo and Heath had the connection down pat even if they are opposites, but then there's the fact that they work in the same office that serves as an unavoidable complication. These two also had pasts that made them apprehensive when it comes to relationships, but when the feels get a hold of them, it's simply a matter of learning how to communicate better and be brave enough to put their hearts and futures on the line. Overall, Kismet was a lighthearted read that kept me entertained throughout. It gets four stars. Bring on TJ and Jude next!
Release Date: 08 April 2022
Date Read: 04 April 2022
Learn more about Lauren Blakely.
Pre-order Kismet on Amazon | Apple Books | B&N | Kobo.