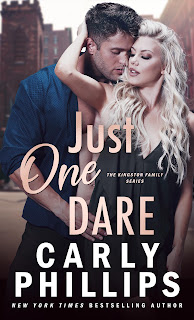 Note: An advance reader copy (ARC) was provided by the author via Wildfire Marketing Solutions.
It may have taken six books, but I do believe I've come across my favorite read in the Kingston Family series! Just One Dare is the fifth novel and sixth release in Carly Phillips's series, and it's a second-chance romance with some surprise pregnancy feels. The night they shared six years ago resulted in a pregnancy that one wasn't expecting and one wasn't privy to. After all, Aurora Michaels was only eighteen back then and barely making ends meet while working at--and living in--a diner in Florida. All she had was the gorgeous college student's first name--Nick--and all he knew of her was her first name as well. There was simply no way for her to find him when she learned of her pregnancy. Fast forward all these years later, and Aurora is now a Kingston, thanks to her oldest half-brother finding her and the rest of her family embracing her, and she's living a life she never dreamed possible. She's a single mom to five-year-old Leah and heading her own charity, Future Fast Track. The last thing she expects is to see a familiar face during a film premiere. It's none other than the father of her child, Nick--Nick Dare, a member of a wealthy family known as the Dirty Dares. When he learns about Leah, he decides to go all in for his daughter--and for the woman he's never forgotten.
I've been curious about Aurora from the moment she was introduced in Dare to Stay, which is the fourth book in the Dare Nation series. The girl had been through a lot up to that point, and her change in fortune, while seemingly very fairy tale-like, had me eager to see how she would go from Aurora Michaels to Aurora Kingston. I appreciated the circumstances leading to her not being able to inform Nick about her pregnancy and her handling of his appearance in her life and that of their daughter's. She really was a mother first, and I quite liked that, thank you very much. As for Nick, I loved how he was all in but also took note to follow Aurora's lead when the situation demanded it. Another thing that was notable was his constant reminder to her that he wasn't just around for Leah but for Aurora as well. I liked that there wasn't this immediate jumping into bed and that they took an acceptable amount of time creating their own bonds as a family and as parents to their child. Now, that all the Kingston siblings have gotten their happily-ever-afters, and it ending with the last Kingston matched with the first Dare from that new branch of that prolific fictional family, I'm truly looking forward to reading the Dirty Dares in a few months! Just One Dare receives five stars.
-------------------------
Read my reviews for the Kingston Family series: