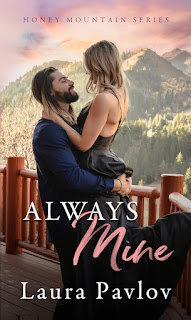 Note: An advance reader copy (ARC) was provided by the author.
Always Mine is the first novel in the new Honey Mountain small-town romance series from Laura Pavlov. While I've read all the books in her co-written G.D. Taylors series with Willow Aster, this latest release marks only my second book penned solo by Pavlov that I've had the opportunity to read. The series centers on the Thomas sisters--Everly, Vivian, Dylan, Charlotte, and Ashlan--who lost their mother nearly nine years ago and adore their father, captain of Honey Mountain's fire department. This is a friends-to-lovers romance set in the titular small town smack dab on the border of California and Nevada and has Vivian Thomas, talented baker and owner of Honey Bee's Bakery, and Niko West, Vivi's best friend, who gave her the nickname "Honey Bee", and a firefighter. The closest of friends since they were kids, Vivi and Niko have had each other's backs for years, but while Vivi's always had a loving family, Niko's home life was the stuff nightmares were made of. His friendship with his Honey Bee is his one constant. There's no way he'd be willing to risk losing, not even when she asks him to show her what she's been missing after the demise of her one and only long-term relationship. But what if he finally agrees and she realizes that she wants to be more than friends?
This series starter had all the elements I look for in the very first book in a new series featuring interconnected standalones. We get the story of Vivi and Niko and their journey towards their very own happily-ever-after. We're also introduced to this wonderful town where people are expectedly in everyone else's business, but they also care about their community. There are also peeks at the four other Thomas sisters, enough to stir up some curiosity, which is a necessary thing when you've got a series, of course. The romance was sweet and steamy, and I enjoyed seeing our main characters go from besties to lovers and then to admitting that they want to be much more. There's even a bit of suspense thrown into the mix--though the villain is rather obvious, it's the anticipation as to what they're capable of and what it may cost Vivi and Niko (and possibly everyone else) that had me at the edge of my seat. Overall, Always Mine was an awesome read, and it definitely sets the bar for our multiple return visits to Honey Mountain. I'm giving this 4.5 stars.
Date Read: 14 April 2022
Learn more about Laura Pavlov.
Purchase Always Mine on Amazon.