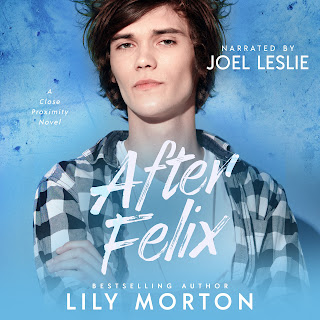 Note: The audiobook was provided by the author via Gay Romance Reviews Tours & Promo.
After Felix, the third and final book in Lily Morton's Close Proximity series, was one of my favorite reads in 2020, so it goes without saying that I've been eagerly awaiting the release of the audiobook edition. Narrated by the uber talented Joel Leslie, who also narrated the first two audiobooks in the series, Best Man and Charlie Sunshine, After Felix is a second chance romance with a bit of an age gap angle to it, what with the main characters, Felix Jackson, who is in his twenties, and Max Travers, who is thirty-seven, when they first meet. Told in two parts--before and after they go their separate ways--Felix and Max were only supposed to hook-up, but it results in repeats--and lots of them. What happens when inconvenient feelings get in the way and mess up what was a good, albeit temporary, thing between Felix and Max?
Joel Leslie narrating Lily Morton's stories is my catnip, and goodness, but how these two never disappoint. This audiobook had the three Rs--romance, redemption, and reconciliation--all a must when it comes to second-chance romances. Felix and Max deserved their happily-ever-after, but I'm glad that getting to that point was neither quick nor easy. I know, I know, it sounds like I wanted these two to get their poor hearts tortured, but it has more to do with ensuring that HEA was well-earned. I loved how they loved each other once they allowed themselves to acknowledge those feelings and fighting for them. Of course, having the rest of the Close Proximity couples is an absolute bonus, and having all of them so darn loved up and happy brought a smile to my face more times than I could count. Morton's writing brought the romance, angst, and humor, and Joel Leslie's performance brought all of that and then some to life for me. Five-plus stars for After Felix!
Date Listened to: 17 April 2022
Learn more about Lily Morton.
Learn more about Joel Leslie.
Purchase After Felix on Audible.