Review: Only One Forever by Natasha Madison (Only One #8) 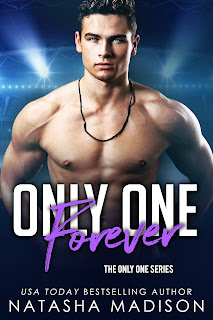 "It was always you," I whisper. "It's always going to be you. My heart doesn't beat without you. All the future memories are blank unless you are in them."

Only One Forever is the eighth novel in the Only One series, and it brings full circle this epic hockey romance saga that began with the Something So series, followed by the This Is spin-off, and now, the Only One books. I'm not entirely sure if this is the final book in the current series, but it feels like it, especially because Natasha Madison has already announced the first book in an upcoming series, Made For, which is a spin-off of the Only One series. If this is the last book, I feel like this is the perfect way to close this series out.
Dylan Stone (son of Justin and Caroline Stone, having been adopted by Justin when Dylan was ten) and Alexandra Horton (daughter of Max and Allison Horton) have been best friends since they were kids. They were each other's constant pillar of support through the years. There are no secrets between the two--except for the fact that Alex has been in love with Dylan for what feels like forever. But over time, Alex has slowly realized one painful fact--one that she finally accepts--and that is Dylan will never see her as more than a friend. She's ready to let him go, but Dylan--and fate--has other plans.
There's something about these hockey romances that Natasha Madison writes that just clicks with me. I dive in and I'm swept, or maybe more of skated, away by the romance and the sport and the ties that bind these families and friends. Dylan and Alex were equally awesome main characters, and having the rest of their clan provided lots of humor and even some angst as well. Only One Forever is a five-plus-starred series ender.
-------------------------
Read my reviews for the Only One series: