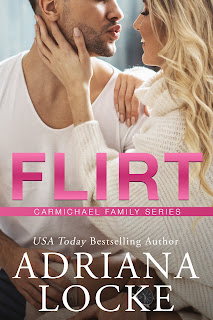 Note: An advance reader copy (ARC) was provided by the author via Candi Kane PR.
Adriana Locke's got a new series, and it's gotten off to a wonderfully flirty start! If you read her previous release, Sweet, which is part of her Landry Family series, then you'll recall the introduction of the Carmichaels. While Paige, the only girl and youngest among the siblings, found her happily-ever-after in more ways than one in that book (no spoilers, so you'll have to read it if you haven't yet), now, we've got her brothers--Foxx, Moss, Jess, Maddox, and Banks--unraveling love and life in Locke's new Carmichael Family series.
First off is Moss, who I'm guessing may be somewhere in his late twenties or early thirties since none of the brothers' ages were mentioned. He's a contractor with Laguna Homes, the family-owned business. He knows how good he is at his job, just like he knows how good he is with the ladies. In short, Moss doesn't lack confidence, a fact that his co-worker, Brooke Bailey, is quite familiar with. The thirty-year-old interior architect is an absolute asset to Laguna Homes and she's a great partner to have, bouncing ideas off of each other, and she's a good friend. So when Moss finds out that an accidentally posted add for a "situation-ship" has now led her to find a guy she can bring to her beloved grandmother's birthday, he does what any close friend would do: offer to be her fake boyfriend. They're already friendly and being flirty isn't that hard. Not falling in love though? Easier said than done.
Well, if this isn't a fabulous way to kick off a new series, I don't know what is. Moss and Brooke's story was lighthearted for the most part, with lots of wit and humor mingling with romance. There's a smattering of angst courtesy of Brooke's issues with her mother and Moss's personal tragedy, but other than that, everything was romantic comedy gold. Add to that the antics Moss's brothers would get themselves and everyone else into, and I'm already officially curious as to how the four remaining single Carmichaels are going to handle falling in love. Flirt was sweet, sassy, and sexy and gets five stars.
Release Date: 08 April 2022
Date Read: 07 April 2022
Learn more about Adriana Locke.
Purchase Flirt on Amazon.