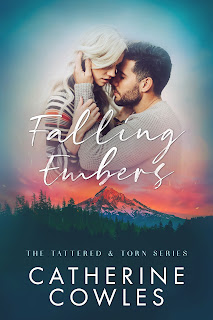 Note: An advance reader copy (ARC) was provided by the author via Social Butterfly PR.

"Hadley." My name was a gravelly whisper in his throat, both a ragged plea and an exaltation.

His eyes glistened with unshed tears. "Always have, always will."

This series is killing me--in the best way possible, of course. We're only two books in, but it's feeling like the Tattered & Torn series is well on its way to becoming my favorite from Catherine Cowles. The series follows the Easton siblings--Beckett, Hayes, Hadley, and Shiloh--of Wolf Gap as they live their lives after one event changes everything for them and their family. Falling Embers is the story of Hadley Easton, second to the youngest among the Easton brood, and Calder Cruz, best friend to Hadley's brother Hayes and considered part of the Easton family. This is a friends-to-lovers romantic suspense read, what with Hadley and Calder being close friends themselves.
There was a time when Calder Cruz showed Hadley Easton what it was like to fly--to break free, even if for a limited period of time, from everything that was weighing them down. But over the past four years, Calder has kept his distance from her, and in the process, he's broken Hadley's heart in bits and pieces. His twin daughters, Sage and Birdie, adore Hadley, and he continues to maintain a close relationship with the rest of the Eastons, but while he does see his Little Daredevil from time to time, that kinship they once shared is gone. There was a time he nearly lost the two girls who meant the most to him; now, will it take nearly losing the woman he loves for him to wake up?
The one thing I've come to expect from Catherine Cowles's writing is the unexpected, and that's something that I tend to hope for with the romantic suspense genre. She once again delivers on the romance between Calder and Hadley, and I loved that feeling of family that they've created with Sage and Birdie. Speaking of family, Hadley's issues with her mother were heartrending, and I wish someone had stood up for Hadley with more conviction sooner. The suspense part also gets a thumbs up from me, and the person who turned out to be a villain was certainly one of my top suspects. Cowles gives us another five-plus-starred read with Falling Embers.
-------------------------
Read my reviews for the Tattered & Torn series: