Review: Famous in a Small Town by Kylie Scott 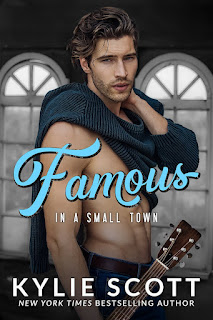 "I wasn't expecting you," he said in a more contemplative tone of voice.

"No," I agreed. "I wasn't expecting you, either. I was going to quite happily live out my life next door with the addition of a dog and cat, maybe. But with a town and a job and people that I love. Just a whole lot of peace, you know?"

"But here we are making things complicated."

Umm, I may need to bump off a title or two on my list of favorite reads for this year because Kylie Scott's newest novel--which I'm reeeeeaaaaally hoping is the first in a new series--has rightfully earned its place. While Scott is known for her rock star romances--hello, Stage Dive books!--and Famous in a Small Town most certainly has a rock star in it, she's given her story a bit of a twist with it being set in a small town (obvs!) and added creative touches with her main characters, including their back stories. We've got thirty-year-old Ani Bennett who is relishing her return to her hometown of Wildwood in Northern California. She's loving the simplicity and serenity of being back home. Then her neighbor moves in, and it's none other than Garrett Hayes, lead singer for The Dead Heart and widower of an equally famous singer. It's been a couple of years since he lost his beloved wife, and while that's perfectly understandable, the guy also happens to be a class A grump. And hot. Let's not forget that. Ani plans on keeping her distance, especially since but when he asks for her help as he tries to start living again, there's no way she could have refused. She may have been a fangirl before she met him and now she's his friend, yet as Garrett's dead heart begins to beat again, dare she hope it beats for her, too? But is it even possible for a big rock star like him to fall for a small town girl like her?
Smitten! I am absolutely SMITTEN with this book! Gaaah! Ani and Garrett were everything I didn't know I needed. These two were a breath of fresh air, and boy, oh boy, did I breathe in every bit of them and their love story. Seeing Ani go from a fangirl (although never obsessively so) to a friend of Garrett's, and then so much more was a joy to behold. She never hesitated to tell him like it was, but she also recognized his need for companionship, as well as solitude when the occasion called for it. Her opening salvo when they first exchanged words was quite memorable, but that doesn't mean that Garrett wasn't a standout male main character. I appreciated his being forthright yet protective, and once he owned up to his feelings, he was all in. The residents of Wildwood provided a lot of levity plus some much needed wisdom and they were super supportive of Gary, erm, Garrett and didn't hesitate to play matchmaker. The town itself was the ideal backdrop, quaint but oh-so-quirky. Then there are the other members of The Dead Heart, Smith, who is also Garrett's closest friend, Lucas, and Adam. I'm going to need their stories as soon as humanly possible, and I'm not above begging Kylie Scott either. I mean, readers like me are already curious about them, so how can we not have a series on our hands?! But for now, I shall bask in the awesomeness that is Famous in a Small Town and am now giddily encouraging romance readers to read it immediately! This receives five-plus stars.
Release Date: 07 April 2022
Date Read: 01 April 2022
Learn more about Kylie Scott.
Purchase Famous in a Small Town on Amazon | Apple Books | B&N | Kobo.