Review: Yours, Forever After by Beth Bolden 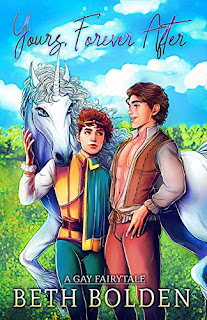 It was funny, because Gray had spent the last fifteen years thinking of all the negatives of being royal. Holding onto the reasons why he never wanted to reclaim his lineage. But here was one; Rory.

I admire authors who push themselves out of their comfort zone to try something new and do it extraordinarily well. Such is the case with Beth Bolden, an author whose work I've read and enjoyed in the past. When I heard that her next release would be a gay fairy tale, I was both curious and anxious to see what story she was going to share with fans and readers. I've read a number of gay fairy tales over the past couple or so years, and Bolden's Yours, Forever After is one of, if not THE best, that I have ever had the absolute pleasure to fully immerse myself. From the world-building to the characters to the development of the story and writing, this novel took me on an unforgettable adventure alongside the Lost Prince, the Autumn Prince, and a haughty unicorn slash matchmaker.

Yours, Forever After is the story of two princes who are lost and find, not just each other, but purpose and enlightenment after their paths cross and they are forced in one another's company. When twenty-year-old Prince Emory of Fontaine is sent on a quest to a valley by his aunt, it becomes clear that it's a journey that he's not meant to come back from. When he reaches his destination, it isn't rebels he finds there; instead, it's a farmhand named Gray who isn't all that welcoming. But soon enough, Rory is about to learn that not all is what it seems, especially since the twenty-six-year-old man before him is actually the lost Prince of Ardglass, Prince Graham and that they share a common enemy. While Gray simply wants to be left alone in his valley, the opportunity to exact vengeance is too great a pull, but maybe not as great as the tugging of his heart towards Rory, who sparks both hope and love.

One is never too old to appreciate fairy tales, and that's certainly true when it comes to me, although I should add a caveat insisting they be wonderfully weaved tales that inspire and entertain. Beth Bolden outdid herself with this book, creating a wholly original story that took hold of my imagination. There was wit and humor as well as heart-tugging moments. Oh, and of course there was romance and heat! Nothing was lacking nor excessive, and I was swept away to a land far, far away by a story with themes close to my heart and a cast of characters that fought their way to a happily-ever-after. Five-plus stars for Yours, Forever After, which is also one of my top reads for 2019. ♥

Purchase Yours, Forever After on Amazon.