Review: Sneaking Around with #34 by Piper Rayne (Hockey Hotties #4) 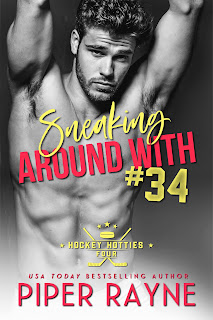 Note: An advance reader copy (ARC) was provided by the authors via Valentine PR.
Sneaking Around with #34 is the fourth novel (but sixth book overall) in the Hockey Hotties series from the awesome twosome that is Piper Rayne. This new book is all about Warner Langley and Imogen Jacobs. He's twenty-eight, a professional hockey player, and was recently traded to the Florida Fury. She's twenty-seven and the new hype girl in the Fury's marketing department. She also happens to be his ex-girlfriend and Ford Jacobs's younger sister--the same Ford Jacobs who used to be Warner's best friend and who is now his new teammate. The end of his relationship with Imogen remains Warner's biggest regret in life. Maybe this is the second chance he's hoped for, but with tensions already high between him and Ford, the last thing Warner wants is to mess with the team dynamic. But Imogen has always been "the one" and this time around, he's ready to go all in with her.
If you're familiar with the Hockey Hotties series, especially the third novel, Faking It with #41, then Warner Langley and Imogen Jacobs shouldn't be strangers to you, as is Ford Jacobs's far from warm welcome when Warner turned out to be one of the newest members of the Florida Fury. But enough Ford (sorry, Ford, but I do still adore you!), although to be fair, his being Warner's teammate and Imogen's brother basically ensures his constant presence. But back to the couple of the moment! As is the case when it comes to second-chance romances, Warner and Imogen have history, and theirs was rather heartrending. Yet the feelings were still there, even after a decade apart, and I loved seeing them go from sneaking around to making a stand as a couple. The Piper Rayne writing duo delivers another satisfying lighthearted romance in Sneaking Around with #34. This receives four stars.
---------------------------
Read my reviews for the Hockey Hotties series: