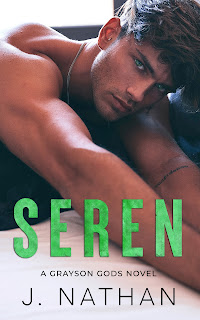 Note: An advance reader copy (ARC) was provided by the author via Grey's Promotions.
I'll be honest, I became rather disenchanted with bully romances a year or two ago. It was a case of reading too many of them, each with basically the same type of anti-hero who spent his time making the helpless heroine feel bad simply because he couldn't deal with his feelings. Think of it like the boy on the playground who'd pull the pigtails of the girl he crushed on, except in these books, they were teenagers and no longer cute and precocious. So yeah, I needed a break from the trope, but on the occasions that I do end up reading it, it's because there's something different about the story line and characters, enough originality and creativity that would entice me to pick the book up and hopefully fall in love with it. But when I learned that J. Nathan had a new series starter, I jumped in without reading the blurb. Then I realized it was a bully romance...but I didn't care at all!
Seren is the first novel in J. Nathan's Grayson Gods trilogy. I'm totally making the assumption that it's a trilogy because there are three Grayson brothers--Seren, Saint, and Sawyer--but don't take my word for it. The eldest brother gets his story told first, but all three are still mourning the death of their beloved father. The eighteen-year-old high school senior is both feared and revered in Windham Prep. No one dares to challenge him...that is, until a girl named Grace came along. The seventeen-year-old is the housekeeper's daughter, and she knows what loss feels like as well. But she's an interloper that Seren never saw coming, and he wasn't prepared for the impact this beautiful, smart, and feisty girl would have on him. After everything he puts her through, will Grace desire to know the real Seren, and in the end, can he trust her with his heart?
It's books like Seren that have me temporarily ending my moratorium on bully romances. J. Nathan gives readers a hero who undeniably made life difficult for the girl he had set his sights on, but Seren was also someone who had depth, was dealing with his own issues, and wanted to redeem himself, not just through words but with actions. And then there was Grace, and goodness, but how I loved that she gave as much as she took, refusing to have Seren or the other bullies of Windham Prep make her feel unworthy. The main characters were opposites on paper--she was from Coopersville and middle class, and he was from Windham and wealthy--but they had a great deal more in common than they'd realized. They bolstered each other and offered truths against all the lies swirling around them. Seren was so much more than even I could have hoped for. It gets five stars.
Release Date: 26 March 2022
Date Read: 17 March 2022
Learn more about J. Nathan.
Purchase Seren on Amazon | Apple Books | B&N | Kobo.