Review: The Potter by Kristy Marie (In the Hands of the Potters #1) 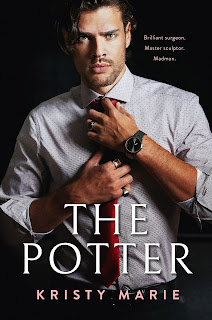 Note: An advance reader copy (ARC) was provided by the author via Wordsmith Publicity.
I am officially a Potterhead, and no, I'm not talking about the series about wizards-in-training and the school they go to. I've only read the first book in said series, and while I liked it, I've yet to read the rest of the books. The reason I'm calling myself a Potterhead is because of Kristy Marie's new series starter, The Potter. This opening salvo in the author's In the Hands of the Potters series features a gifted yet damaged plastic surgeon and the woman who believes he's the only medical professional who can help her. The latter is thirty-five-year-old Dr. Vance Potter, one of three brothers who own Potter's Plastics, a renowned private practice in Texas that specializes in, you guessed it, plastic and reconstructive surgery. The former is twenty-three-year-old Halle Belle, an aspiring actress from Georgia who has pinned her hopes on the second eldest Dr. Potter. But Halle's savior turns out to be more of a tormentor, not only turning her down as a patient but making her feel unwelcome when she begins working for his older brother. Halle should stay away from Vance, but maybe stirring (up) this Pot(ter) will be worth the risk.
There's something about Kristy Marie's books--at least the ones I've read so far--that tickles my fancy. The fact that The Potter is the first in a new series is the "and then some" in this whole fancy tickling fest. Think of Vance and Halle's story as a grumpy/sunshine romance at its simplest form, because there is so much more to it than that. There's the expected humor with a peppering of angst to go with the anticipated sexual tension and romance, but as always, this author's writing adds in her own creative touch and we get a story and characters that feel fresh and worthy of some major emotional investment. Aside from the main characters, Vance's brothers, Astor (who is older) and Duke (who is younger), and Halle's "neighbor", Remington more than piqued my interest and curiosity, which I feel bodes well for the rest of the series. If the books to come from In the Hands of the Potters is as marvelous as this first one, then I shall be one happy camper. Five stars!
Release Date: 17 March 2022
Date Read: 14 March 2022
Learn more about Kristy Marie.
Purchase The Potter on Amazon.