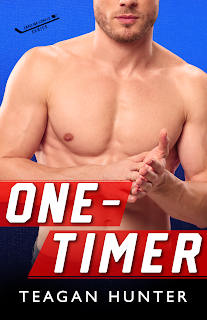 Note: An advance reader copy (ARC) was provided by the author via Valentine PR.
I love it when a series simply gets better and better with each new novel that's released, and such is the case with Teagan Hunter's Carolina Comets hockey romance series. The third book, One-Timer, has just been released, and dare I say that it's my favorite story in the series so far? This employs the surprise pregnancy trope, and it features Cameron Lowell and Hollis Kelly. He's a professional hockey player who hasn't done commitment ever since one relationship left him heartbroken and jaded, and she's a content writer who's plans went to awry after she discovers her husband cheating on her, leading them to divorce. The first time they meet may have left them with not-so-great initial impressions, but things certainly get better during her sister's and his teammate's wedding, good enough that they agree to engage in a "one-time bad decision". They would go their separate ways, never making plans to keep in touch or see each other again...until Hollis finds out that Lowell truly was good at one-timers, because all it took was one time together for them to get pregnant. How do you co-parent with a guy you can't even stand in the first place?
Ooh, I enjoyed the heck out of Cameron (aka Lowell) and Hollis! These two had that great back and forth from the moment they met, and that tension carried throughout the book, especially as they tried to figure out how to work together as parents-to-be and see if there was more to their connection than lust. Their text exchanges had me snickering at their lighthearted and often sarcastic banter. I appreciated that Teagan Hunter allowed their romance to simmer and sizzle after that initial scorching encounter they shared during Collin and Harper's wedding. Cameron and Hollis were intimately familiar with deception and disappointment, so establishing a firmer footing for these two to build a relationship--and a family!--on mattered. Hunter delivered the romance and the humor, and yes, the hockey, too. She also had the recurring characters make the presence known--and goodness, but how I loved the protectiveness they had towards Hollis--without taking away any bit of attention from the main characters. I know who book four will be about, but dare I hope that Miller snags himself a book, as well? Fingers crossed! One-Timer gets five stars.
------------------------
Read my reviews for the Carolina Comets series: