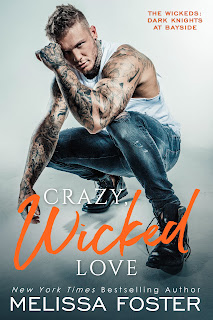 Note: An advance reader copy (ARC) was provided by the author.
It's a wicked, good time with the Wickeds over at Bayside with the third novel in Melissa Foster's The Wickeds: Dark Knights at Bayside series. This time around, we've got Dwayne Wicked, better known as Gunner, and his best friend and roommate, Sidney Carver. Both are twenty-nine and met while they'd been stationed at the same military base. An injury led to Sid leaving the military alongside her K-9, Rosco, nearly four years prior, with Gunner following soon afterwards. Now, the besties work together at the Wicked Animal Rescue and know almost everything to know about each other. Well, maybe except the fact that Sid has had feelings for Gunny for more years than she'd ever care to admit. She's come to accept that he may never see her as anything more than his ride-or-die, especially since she looks nothing like the women he usually hooks up with. But maybe, just maybe, she can get him to see what's been right in front of him all this time. It may take a bit of crazy subterfuge on Sid's part, but in the end, she may finally get her Wicked.
A girl's gotta do what a girl's gotta do, and in Sidney's case, getting Gunner to see her as more than his best bud may have required some creative, erm, planning on her part. I loved how comfortable Sid and Gunny were with each other. It was clear that theirs was a friendship based on love, trust, and respect, but going from platonic to romantic could have cost them said friendship, so I get why there was a great deal of hesitation on both sides. My heart did go out to Sidney, because let's be honest here, seeing the guy you're in love be with other women is never going to be an easy feat. I don't think that Gunner was a jerk about it, though, since it seemed like he honestly didn't realize Sid saw him as anything more than a friend. I loved how Melissa Foster was able to strike a balance between the overall lighthearted feel of the romance and the more angsty aspects of the overall story. As always, it was fun seeing the established couples, as well as glimpsing possible upcoming pairings. In short, I want more! Crazy, Wicked Love receives 4.5 stars.
-------------------------
Read my reviews for the Wickeds: Dark Knights at Bayside series: