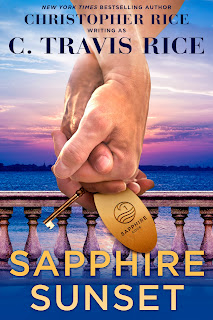 Note: An advance reader copy (ARC) was provided by Blue Press Box via Social Butterfly PR.
Sapphire Sunset is the first novel in the new Sapphire Cove series from bestselling author Christopher Rice writing as C. Travis Rice and published through Blue Press Box. Set in the eponymous fictional luxury resort along the Southern California coast, book one is about Logan Murdoch and Connor Harcourt. Twenty-seven-year-old Logan left behind from what was a remarkable career in the Marine Corps in order to work security at an affluent beachfront resort. The reason? To be able to pay for his father's medical needs. Acting on his attraction to the twenty-three-year-old recent college graduate and next in line to take over Sapphire Cove. There's something about Connor that just draws Logan to him, but resist he must. Five years later, Connor returns to Sapphire Cove, and together, he and Logan need to get a handle on a scandal that could bring down the resort. Saving Sapphire Cove from the bring of disaster is one thing, but taking a chance on something that they both walked away from five years ago may save them from lives far less lonely.
My first read from Christopher Rice was Dance of Desire back in 2016, and that landed on my list of favorite reads for that particular year. So when I heard that he had a new series in the offing and that it was M/M romance under his C. Travis Rice pseudonym, I knew I was going to add the books on my to-be-read list. The series starter, Sapphire Sunset, offered up a good look at the main setting for all the stories, luxury California resort Sapphire Cove, while also giving readers a great second-chance romance between this first set of main characters, Logan and Connor. I loved the connection that these two shared, and their story was swoony with a good balance of angst and more lighthearted moments. There were also several notable supporting characters, that have me curious what awaits them as this new series moves forward. I'm giving Sapphire Sunset 4.5 stars.
Date Read: 27 February 2022
Learn more about C. Travis Rice.
Purchase Sapphire Sunset on Amazon | Apple Books | B&N | Kobo.