Review: The Secret by Kristen Proby (Single in Seattle #1) 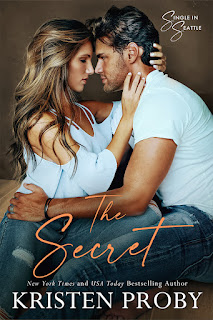 Note: An advance reader copy (ARC) was provided by the author via Valentine PR.
I love it when an author launches a spin-off series that features the next generation of established couples and families that readers have already fallen in love with. In the case of Kristen Proby, Single in Seattle is the spin-off of her With Me in Seattle series, the same series that launched her career and captured the hearts of many readers, me included. The Secret is the first book, and this series starter may be read independently of the original series, but if you're a longtime reader of Proby's and are familiar with the Come Away with Me stories and characters, you'll get a kick out of the cameos while getting to know this younger generation who will be spotlighted throughout this spin-off.
Olivia Williams is the female main character, Liv being the daughter of Luke Williams and Natalie Conner (Come Away with Me, book one in With Me in Seattle). Here, she's twenty-five and a talented costume designer working for her father's production company under the name of Olivia Conner. She's paired with Vaughn Barrymore, a well-known and gifted actor whose family is considered Hollywood royalty (although I don't recall any mention of the famous Barrymores of stage and screen--Lionel, Ethel, and John, and for the younger generation, Drew--I'm guessing Vaughn is supposed to belong to some branch of that clan). Hooking up already comes up with it a feeling of the forbidden; falling for each other adds layers of complications. Liv can only keep Vaughn a secret from her family for so long; what will keeping the man she loves forever cost her?
I stopped myself from re-reading Come Away with Me prior to reading The Secret because I wanted to experience Liv's story somewhat separately from that of her parents' romance, allowing for a better appreciation of both. I liked the chemistry between Liv and Vaughn, and peeling back Vaughn's layers highlighted how much more there was to him. I wouldn't necessarily say that Liv made Vaughn a better person, but more of her showing him that it was okay to let your guard down and entrust your heart with someone else. I also appreciated that while they did hook up faster than you could say the word "hook-up", they did get to know each other beyond how compatible they were in bed. The With Me in Seattle cameo appearances were a definite bonus for me. Four stars!
Release Date: 22 March 2022
Date Read: 17 March 2022
Learn more about Kristen Proby.
Pre-order The Secret on Amazon | Apple Books | B&N | Kobo.