Review: The Confidence of Wildflowers by Micalea Smeltzer (Wildflower #1) 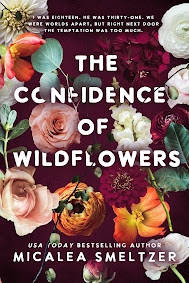 Note: An advance reader copy (ARC) was provided by the author via Grey's Promotions.
The Confidence of Wildflowers is the first book in the Wildflower duet from Micalea Smeltzer. This is the story of Salem Matthews, who at eighteen is living the life most teenagers are, knowing that she's now an adult but still feeling like so much remains unknown. But she has nothing much to complain about, and she's good with not having all the answers for now. She's got her mom, her friends, and a boyfriend who loves her. And then an absolute grump moves in next door to her and her mom. Thayer Holmes is thirty-one, divorced, a father to six-year-old Forrest, and a landscaper. And grumpy. Did I mention that already? When he offers Salem a babysitting gig for the summer, it quickly becomes more than a way for her to earn some cash. She adores Forrest--as he does her--but Thayer is someone she's drawn to in a way that should feel wrong. After all, he's thirteen years older than she is and he's her boss. So why does it feel so right whenever he's around?
It's been a bit since I finished this book, and I'm still unsure as to how to rate it. For the first 85%, this would have been at least 4.5-starred read for me. I liked the angst and while there is cheating--Salem is in a committed relationship with Caleb when she starts to become infatuated with Thayer--that isn't a hard limit for me. I was intrigued by the age gap--she's eighteen, he's thirty-one--and the whole single parent and grump guy next door thing is my jam. But then in the last fifteen percent or so of the book, it felt like there was a mad rush to pile on one thing after another, with the main characters becoming tragic figures in their own seemingly doomed romance. I love angst in my romances, but this was too much in such a short period of time. That being said, the cliffhanger ending still piqued my curiosity, and I shall still be checking out the second book when it's released in April. So, taking all my thoughts and feelings and Micalea Smeltzer's wonderful way with words into consideration, I'm giving The Confidence of Wildflowers 3.5 stars.
Release Date: 23 March 2022
Date Read: 20 March 2022
Learn more about Micalea Smeltzer.
Purchase The Confidence of Wildflowers on Amazon.