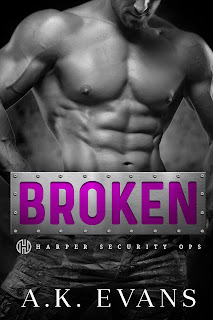 Note: An advance reader copy (ARC) was provide by the author via Give Me Books Promotions.
Broken is the first book in the new Harper Security Ops romantic suspense series from A.K. Evans. This is my second read from the author, having been introduced to her writing by way of her Rock Stars & Romance series last year. Funnily enough, I was looking forward to reading the rest of the aforementioned series, but I had no idea that five other books had already been released since I perused the series starter back in September of 2021. Go figure! But I digress! I'm glad I get to jump back into reading Evans's work, and with a new series starter to boot. Fingers crossed I do a better job keeping track of this series so that I don't end up with a repeat of the one that came before this. It's about having way too many books and way too little time.
Royce Blackstone and Tarryn Hendrix are the main characters in this Harper Security Ops series starter. He's thirty-five, former military, and the owner of Harper Security Ops; she's twenty-nine, a donut-making whiz, and the owner of The Early Bird. For two years, Tarryn has prepared herself for exacting revenge on those who hurt her younger sister. In that same amount of time, Royce has done his best to not break his one rule, and that's to never become involved with any of his clients, but then no one's tempted him as much as Tarryn has. When he learns of her plans to seek vengeance, Royce knows there's no way he can keep his distance from Tarryn any longer. He's prepared to do whatever it takes to keep her safe, even break his very own rules.
This was a strong beginning to the Harper Security Ops series. A.K. Evans clearly knows how to balance both the romance and suspense aspects in this series starter. She's also given readers two main characters who have dimension to them, while also delivering a story that has depth and had me eager to see how everything would be resolved. I also liked the cast of supporting characters, most of whom had me wondering who would be getting their own story and what their journeys to their happily-ever-afters would be like. Evans's writing has once again left me with a good impression, one that has me eager to read the rest of the books in this series going forward, and hopefully, have me perusing her back list when time permits. 4.5 stars for Broken.
Release Date: 22 March 2022
Date Read: 19 March 2022
Learn more about A.K. Evans.
Purchase Broken on Amazon | Apple Books | B&N | Kobo.