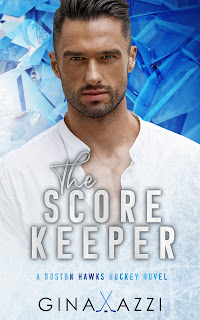 Note: An advance reader copy (ARC) was provided by the author via Give Me Books Promotions.
I don't think I could have chosen a better way to end the Boston Hawks Hockey series than with the romance between the Boston Hawks team owner and the only daughter of a rival team owner! The Score Keeper is Scott Reland's story, one he shares with Noelle DiSanto. Each time their paths have crossed, they can't help but be drawn to one another. The connection is there, and the chemistry is one that holds a great deal of promise. But thirty-four-year-old Noelle is wary about becoming involved with anyone in the world of professional hockey. Her father's first priority is his team, the New York Sharks, and her ex-boyfriend was a player in more ways than one. But something about forty-four-year-old Scott entices her, so when she moves to Boston to open her second bakery, he decides the time has finally come to show Noelle that what they share is something special and worth exploring.
Scott and Noelle's story was a great way to wrap up all things Boston Hawks while also touching on the Tennessee Thunderbolts spin-off series, which launches in a couple of months. It was interesting to see these two almost effortlessly enter into a relationship with open minds and hearts, but then realize that becoming part of each other's lives also involved communication and compromise, especially given that Scott had an entire organization to lead and manage and Noelle was still in the beginning stages of creating a name for her beloved bakery business. This was a fairly lighthearted romance with a smattering of angst courtesy of some family drama on Noelle's side. It was also nice having the couples from the earlier books in the series make appearances here. Overall, I liked The Score Keeper, which is why it snags 4.5 stars, and consider me curious about the spin-off!
Release Date: 03 March 2022
Date Read: 01 March 2022
Learn more about Gina Azzi.
Purchase The Score Keeper on Amazon | Apple Books | B&N | Kobo.