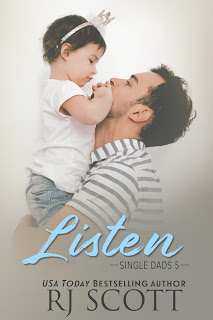 Note: An advance reader copy (ARC) was provided by the author.
I'm a sucker for the single parent romance trope, so RJ Scott's Single Dads series is like literary cat nip for me. Of course, that doesn't mean that I think every book that has a single parent in it is worth reading. However, not only is Scott an author whose work I've enjoyed in the past, but I've read the first four books in this series and fell in like with them. Listen is the fifth novel, and just like those before it, this can be read as a standalone. There are recurring characters, but you can always check out the other books (Single, Today, Promise, and Always) and read them randomly or in chronological order.
Listen is the story of Nicholas Horner and Elliot Curtis. Nick is thirty-nine, a widower and father to three kids, Hannah, Caleb, and Mason, and an investigative journalist. On the other hand, Elliot is twenty-six and a teacher at the private school Nick's children attend. When one parent-teacher conference ends up becoming a disaster, the two men spend the next two years avoiding each other. Then Nick finds himself in need of help with his adoption of little Teegan, and the best person for the job? Well, it's none other than Elliot.
Love after loss stories are always a favorite of mine, mainly because they inspire hope after something as devastating as the passing of their significant other. I appreciated that RJ Scott highlighted Nick's relationship with his late husband, Danny, without overshadowing the new relationship he and Elliot were building. Another thing I loved about this book had to do with the dynamics between Nick and his three amazing kids, as well as how they welcomed the new additions--Elliot and Teegan--to their family. Nick and Elliot had to work through certain things before getting to their happily-ever-after, but that just made that ending all the sweeter. I'm giving Listen four stars out of five stars.
Release Date: 18 March 2022
Date Read: 15 March 2022
Learn more about RJ Scott.
Purchase Listen on Amazon | Apple Books | B&N | Kobo.