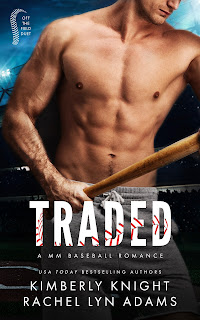 Note: An advance reader copy (ARC) was provided by the authors via Give Me Books Promotions.
Traded is the first book in the Off the Field duet from the writing team of Kimberly Knight and Rachel Lyn Adams. While Knight is somewhat of a familiar author to me having read a book of hers back in 2015 (eep!), Adams is new to me, but this re-introduction to the former and introduction to the latter left me pretty impressed. I'm not a hundred percent sure if this is the first time Knight and Adams have teamed up or if they've penned something as a duo in the past, but either way, it's clear that they do work well together.
Traded is an M/M romance set in the world of professional baseball and with an enemies-to-lovers feel to it. Aron Parker is twenty-eight and plays for the St. Louis Cardinals, while Drew Rockland is thirty-three and plays for the New York Mets. Aron's cocky on the field, and off it, he's happily single and always ready to mingle. On the other hand, Drew's built his career on being cool, calm, and collected, and he's been in a committed relationship for a couple of years. When an on-field brawl ends in the two getting suspended, the last thing they expect is to get traded to the same team, the Colorado Rockies, and share an apartment. Things are about to get awkward then complicated--in more ways than one.
This book was a pleasant surprise! I didn't know until after I'd read it that Kimberly Knight had already written an M/M novella, and I only learned that because I was curious about two characters that were mentioned a couple of times in this new story. Not sure if that was her only M/M story, nor have I checked if Rachel Lyn Adams has penned any of her own. Not that it matters because Aron and Drew's story turned out to be a rather good one. I liked the tension and appreciated that the authors didn't skimp on the baseball. I'm already counting the days till Outed is released in July. 4.5 stars go to Traded.
Release Date: 31 March 2022
Date Read: 30 March 2022
Learn more about Kimberly Knight and Rachel Lyn Adams.
Purchase Traded on Amazon | Apple Books | B&N | Kobo.