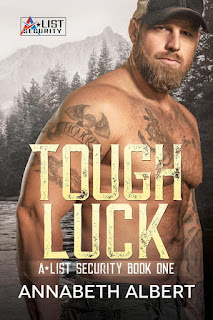 Note: An advance reader copy (ARC) was provided by the author.
Annabeth Albert's got a new series called A-List Security, and it gets off to a strong start with Tough Luck. Cash Erwin is thirty-eight and a SEAL who has recently retired and unsure of what the next chapter of his life is going to look like. His best friend and fellow former SEAL, Duncan Lubov, has been trying to get him to join A-List Security, the company Duncan created to provide close-in security for famous individuals. Cash has been hesitant to say yes, but he certainly couldn't say no when Duncan asks him to keep his half-brother who's got a stalker problem safe. While twenty-five-year-old Daniel "Danny" Love has chosen to step back from acting, someone's out there reminding him that he's being watched. Now that Cash is by his side, he can't help but feel protected...and cared for...and heck, he can't help but fall for the guy. The thing is, could Cash feel the same about Danny?
This was a fun read, one with lots of romance, some suspense, and a pinch of angst just to make it even better. I liked the dynamic between Cash and Danny. These two were the sweetest, and it was clear from the get-go that they had a connection. It was interesting to see how Cash dealt with his own attraction towards Danny, especially since this was all rather new to him. I think Danny was the perfect guy to help him not only explore the physical aspects of said attraction, but as far as the more emotional side of it was concerned, they bolstered each other because Danny had never actually been with someone who would go all in for him. Tough Luck was a four-starred beginning to the A-List Security series, and I look forward to reading the rest of the books to come.
Release Date: 24 March 2022
Date Read: 16 March 2022
Learn more about Annabeth Albert.
Pre-order Tough Luck on Amazon.