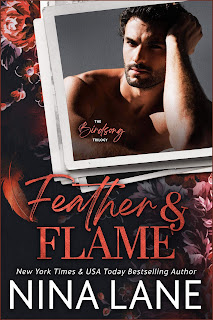 "My beautiful girl." He puts his hands on either side of my head, brushing his thumbs across my cheeks. His eyes glitter. "You are the only thing that makes perfect sense in this world."

Oh. My. GAAAAAH!!! Cliffhangers are evil in general, but the one in Feather & Flame? It belongs in the Hall of Fame of Evil Cliffies. I was THIS close to doing a John McEnroe except with my tablet. Nina Lane surpassed every single one of my astronomically high expectations with this second novel in her amazing Birdsong trilogy. Of course, those expectations being as lofty as they were are on her. That's what happens when a series starts off as impressively as Lane's newest one did. Sparrow & Hawke introduced readers to Nell Fairchild and Darius Hawke. Nell was eighteen and his late step-sister's only child, her father being his best friend. Darius was forty and a renowned photojournalist. They both sought solace, and they found it in each other. That book ended in a cliffhanger as well, though not too evil. This book picks up four years afterwards.
I don't really have the words to explain how this book--THIS SERIES!--has me all gobsmacked. Labeling it an age-gap romance seems limiting, and Nell and Darius's love story goes beyond being about their age difference. Four years has brought about changes in both our main characters, and while I will not be divulging anything in terms of the story, suffice it to say the one thing that remains constant is how they feel for each other. Nell and Darius's circumstances have made things more complicated, except this time around, the situation they find themselves in is not only dire but quite dangerous. Nina Lane has created a love story that is in a class of its own. Five-plus stars for Feather & Flame. Trust me, it's earned every single one and deserves far more. Is it too early to add the Birdsong trilogy to my list of absolute best reads of 2022?
-------------------------
Read my reviews for the Birdsong series: