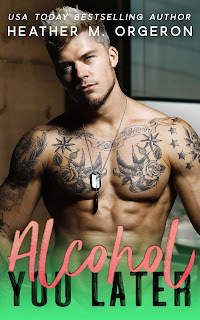 Note: An advance reader copy (ARC) was provided by the author.
Alcohol You Later is Heather M. Orgeron's newest standalone, and it shares ties with Pour Judgment, which was released in 2019. This is a friends-to-lovers romance with a heavy dose of perceived unrequited love and rock star feels added to the mix. When Raven Winters stuck Nicholas Potter's poster on her wall, she could only hope of meeting the guy she had a major celebrity crush on. As luck would have it, however, the drummer for the hottest country band on the planet was her roommate's cousin. Even better? When Raven and Nick meet, they click. The attraction is very much and the chemistry demands to be explored. But Nick isn't interested in settling down, so the most commitment Raven gets out of him is friendship, one that involves certain benefits. She knows she deserves better, but she can't seem to refuse him every time he calls, drunk or not. An invitation to join him tour fills her with hope, but then she finds out why Nick wants her with him.
Goodness but how this book had me looking like a lunatic whilst I was reading it. Let's just be glad that I work from home, and I've yet to venture out so the public was spared having to witness my embarrassing behavior. But can you blame me? Raven and Nick and their story had me on a roller coaster of emotions, and I confess that I lost track of the number of times, I wanted to shake them and smack them upside the head--the former more for Raven, and the latter for Nick. In many ways, this was a story of realization and redemption. Raven loved Nick, and she loved him completely, putting him first, even if it meant breaking her own heart in the process. They had a lot of growing up to do, and the circumstances of what lead Raven to join the tour becomes the impetus for just that. These two had to decide whether or not to fight for what they shared, and seeing them hurdle those obstacles made Alcohol You Later a rewarding 4.5-starred read.
Release Date: 04 February 2022 03 February 2022 (early release)
Date Read: 03 February 2022
Learn more about Heather M. Orgeron.
Purchase Alcohol You Later on Amazon.