Review: Beauty and the Baller by Ilsa Madden-Mills 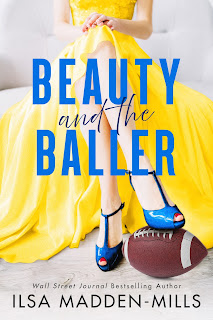 "Jesus...you're..." He stops and puts his face in my neck, taking deep breaths.

"Everything a man could ever want."

Fake relationship romances are a hit or miss with me, but Ilsa Madden-Mills's new standalone from Montlake wasn't just a hit, it was one heck of a spectacular touchdown. Beauty and the Baller is set in the small Texas town of Blue Belle and pairs up a retired football player turned high school football coach with a former homecoming queen. When the time came for  Ronan Smith to retire after an illustrious career, going from player to coach seemed like the best option. Of course, the hope was to be a coach of a pro team, but for now, it would do. He's treated like royalty by the town, pinning all their dreams on this former superstar player and champion. His neighbor, however, isn't too keen on him. Nova Morgan has no problem putting him in his place. It's clear she doesn't have a high opinion of him, but her dislike appears to be more deeply rooted. But Ronan would rather be in a fake relationship with Nova than being forced into a real one with any of the women the booster club shoves his way. Surprising them both, Nova agrees. But what happens when it  begins to feel all too real between them and Ronan's past reminds him that loss can feel just as real as love?
This book brought me such great joy! I read Nova and Ronan's story in one sitting, and for good reason. Ilsa Madden-Mills has penned a romance that may have a well-worn trope but has added her own wonderfully creative touch to it. This was a lighthearted read, one that elicited silly grins and outright bursts of laughter from me, but it also had a touch of angst to it, particularly due to Ronan's past. The supporting characters were a hoot, and I was glad that there was no one who was notably vile or evil. That isn't to say that the journey to a happy ending for the main characters was free of issues and complications. Sometimes, we need the reminder that while the path we're on may not be the one we saw ourselves on years ago, it could very well be the right one today. From start to finish, I simply sat back and enjoyed the heck out of this book. I became quite attached to Nova and Ronan and the rest of the cast, and if I could give this book more stars, I would. Beauty and the Baller gets five-plus stars and has easily joined my list of top favorite reads for 2022.
Release Date: 29 March 2022
Date Read: 18 March 2022
Learn more about Ilsa Madden-Mills.

Pre-order Beauty and the Baller on Amazon.