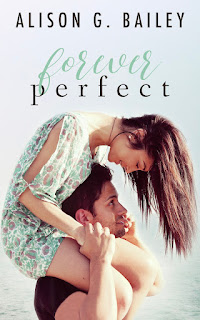 Note: An advance reader copy (ARC) was provided by the author via Valentine PR.
My introduction to Alison G. Bailey's writing came by of her debut release, Present Perfect, back in August of 2013. That book would be the start of her Perfect series, and I got to read Past Imperfect and Presently Perfect, in 2014, as well as most of her standalones to follow, but it was that first book that's remained my favorite from this author. Admittedly, nothing has come close to the positive impression that series starter left me with. Then I found out that there was going to be fourth book added to the Perfect series, and it would feature the next generation--Noah and Amanda (Tweet) Stewart's daughter, Halle, and Brad and Mabry Johnson's son, Brandon, who is two years older than Halle. Though it was Brandon's younger sister, Paige, who Halle was actually best friends with, she and he had their own friendship that she cherished, all while she was nursing a crush on him. But then when she hit her teens, he decided to push her away and he made it his mission to keep her at a distance. Will it take one tragic event to make Brandon realize they belong together?
As a whole, Forever Perfect was an interesting read, one that had some definite angst to it. Not only do we get this new generation of characters--Halle Stewart, Brandon and Paige Johnson, Ryan McNamara, and Drake (whose last name I don't recall being mentioned)--but the original couples, Noah and Tweet Stewart and Brad and Mabry Johnson, make their presence known because of certain unresolved issues from the past. The story on its own held my attention, but oftentimes, the writing itself felt disjointed. Events were segmented, not having that natural flow as you go from one chapter to another. I actually felt bad for Ryan, because even though he was somewhat of a jerk when they were growing up, you could see how much he adored Halle when they become a couple. The whole calling her "Princess" also seemed to be nothing more than a way to paint him in somewhat of a negative light. I also expected better from Noah when it came to his treatment of Brandon, but I did get where he was coming from. So all things considered, Forever Perfect receives 3.5 stars.
Release Date: 22 March 2022
Date Read: 18 March 2022
Learn more about Alison G. Bailey.
Pre-order Forever Perfect on Amazon | Apple Books | B&N | Kobo.