Review: The Real Baxter by Lane Hayes (The Baxter Chronicles #1) 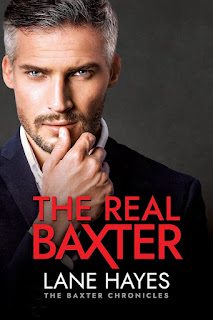 Note: An advance reader copy (ARC) was provided by the author via IndiGo Marketing & Design.

"I only wanted you."

You know how there are just to peripheral characters in a book series that just capture your attention, and with each new book that the author releases, you hope, wish, and pray that it'll be about that very character? That was Sebastian Rourke for me. From the moment he made his presence felt and known in Starting From Zero, book one in the Starting From series, I knew I was going to need to get to know this guy better. So I waited...and waited...and waited. Buuuuut, it's finally here! Yes, folks, Seb's got his own novel out in the wild, and dare I say that it's one of my favorites from Lane Hayes? She most certainly made that wait worthwhile.
I've loved almost every story this author has written, but I confess that her previous series didn't leave me as smitten as everything that came before it; although to be fair, I adored the most recent one from said series. But Seb's book? Goodness, but how The Real Baxter held my attention while keeping a firm grip on my heart from start to finish. This is the first in the Baxter Chronicles series--Baxter being the titular fictional character in a series of successful films produced by Seb--and it's got an entertaining mish-mash of tropes--age gap, fake relationship, opposites attract--while still being pretty darn original with a creative spin to it.
Forty-eight-year-old Sebastian Rourke couldn't possibly want for anything more in his life. He's got two great sons, a best friend who's stuck by him through the highs and lows, and a production company that's renowned worldwide. But what the public sees isn't always the truth, and if it's one thing life has taught him, it's that sometimes, embellishing the truth is a necessary evil. Done well enough, no one will notice. Except Trent Mackay isn't like everybody else. The thirty-seven-year-old aspiring actor may do a British accent and can play a bodyguard, but being Seb's boyfriend? He refuses to fake that because Trent wants the real thing.
I knew going into this that Seb was complicated. The clues were right there in the Starting From books, but man, the guy broke my heart. He deserved his own happily-ever-after just as much as his best friend who happens to be his ex, but goodness, his hesitation to go all in was more self-sabotage than self-protection. But Trent? He was exactly who Seb needed, and vice-versa. So much of what happens inThe Real Baxter took me by surprise in the best way possible. I smiled, I laughed, and yes, at one point, I actually got teary-eyed. I had ALL THE FEELS, and now, the bar has been set high for the rest of The Baxter Chronicles. Five-plus stars.
Date Read: 07 March 2022
Learn more about Lane Hayes.
Purchase The Real Baxter on Amazon.