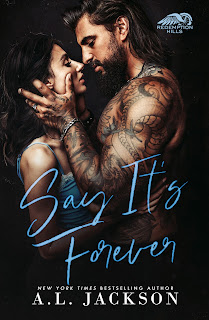 Note: An advance reader copy (ARC) was provided by the author.
We're back in Redemption Hills, California, and A.L. Jackson delivers her patented brand of romance and suspense in the second book of her Redemption Hills series. Say It's Forever is all about Jud Lawson and Salem (okay, I can't recall her last name being mentioned, but if it was, please let me know via the comments section!). Jud owns Iron Ride, a custom bike shop known for its original builds as well as its restorations. When he finds a woman stuck next to her stalled vehicle by the side of the road one stormy night, he knows stopping is the right thing to do. He never quite realized that coming across Salem would change his life in ways he never expected. The single mom was a force to be reckoned with, one Jud didn't see coming. She would do anything and everything for her daughter, Juniper, and with their lives in flux, Salem can't afford any type of distraction, especially the kind that comes in the form of the gorgeous, kind-hearted, and protective man who consumes her thoughts. Both are ensnared by their pasts, and while they're choosing to live in the moment, if they have any hope of a future and forever, they'll have to face what's been left behind.
Okay, I have a thing for single parent romances, and I'm not picky as to which main character is the single parent. What I love about this particular trope is seeing how the main characters create their own family. It's a whole different coming together as compared to two single, childless people. A.L. Jackson offers up two very unforgettable main characters in Jud and Salem. Their back stories were undeniably heartrending, and they know all too well what it's like to entrust your heart to someone else, only to have them break it without a backward glance. They protect themselves from more hurt and disappointment, but when their paths cross in Redemption Hills and they become part of each other's lives, there's a protectiveness that one feels towards the other and vice-versa. Then there's Juni, and goodness, not only does she have one of my all-time favorite names, but this little girl was extraordinary, and was such a light in this story that tackled some heavy and dark themes, plus had some twists and turns. Having said that, Say It's Forever was a beautiful story of love and family, and life giving you that second chance to finally have both. I'm giving this five stars. Oh, and a word of advice? Make sure to get the bonus epilogue. It was the proverbial cherry on top of an already awesome sundae. I had tears.
------------------------
Read my reviews for the Redemption Hills series: