Review: You Keep Breaking Us by Carrie Aarons (Prospect Street #3) 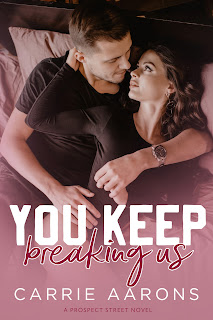 Note: An advance reader copy (ARC) was provided by the author.
You Keep Breaking Us is the third novel in the Prospect Street new adult romance series from Carrie Aarons. This second-chance romance features erstwhile couple Bevan Fabin and Callum Strass. These two were the "it" couple in high school--the one that other couples wished they could be, the one that was destined to be together forever. Attending the same college seemed like a no-brainer, a natural progression of their relationship if nothing else. But that's when everything began to fall apart, and then...it all ended. Callum moved out of the home on Prospect Street that he and Bevan shared with their closest friends. But now that it's their senior year, circumstances have forced him to return, and things are awkward at best. Moving on has proven to be easier said than done, even after a year and a half after they ended things. Will living together under the same roof make them see they're meant to be or lead them to truly let go one final time?
I'm a wee bit torn. I enjoy second chance romances because I'm a sucker for couples that are meant to be together, even after being apart for an extended period of time. In the case of Bevan and Callum, however, there was just an almost insurmountable amount of toxicity between them that made me feel for the most part that maybe they were better off apart. The fault is on both sides, if I'm being perfectly honest. These two made their share of mistakes and hurt each other--sometimes, unintentionally and other times, on purpose. Bevan had one particular issue holding her back, and she needed to realize that seeking help for it was something she owed herself and not Callum or anyone else. As for Callum, there were moments where he came off as selfish, but just like Bevan, he needed to mature and take responsibility. I do wish this had a bit more angst, but all things considered, it ended rather satisfactorily. You Keep Breaking Us receives four stars.
Release Date: 11 March 2022 09 March 2022 (early release)
Date Read: 08 March 2022
Learn more about Carrie Aarons.
Purchase You Keep Breaking Us on Amazon.