Review: The Last Piece of His Heart by Emma Scott (Lost Boys #3) 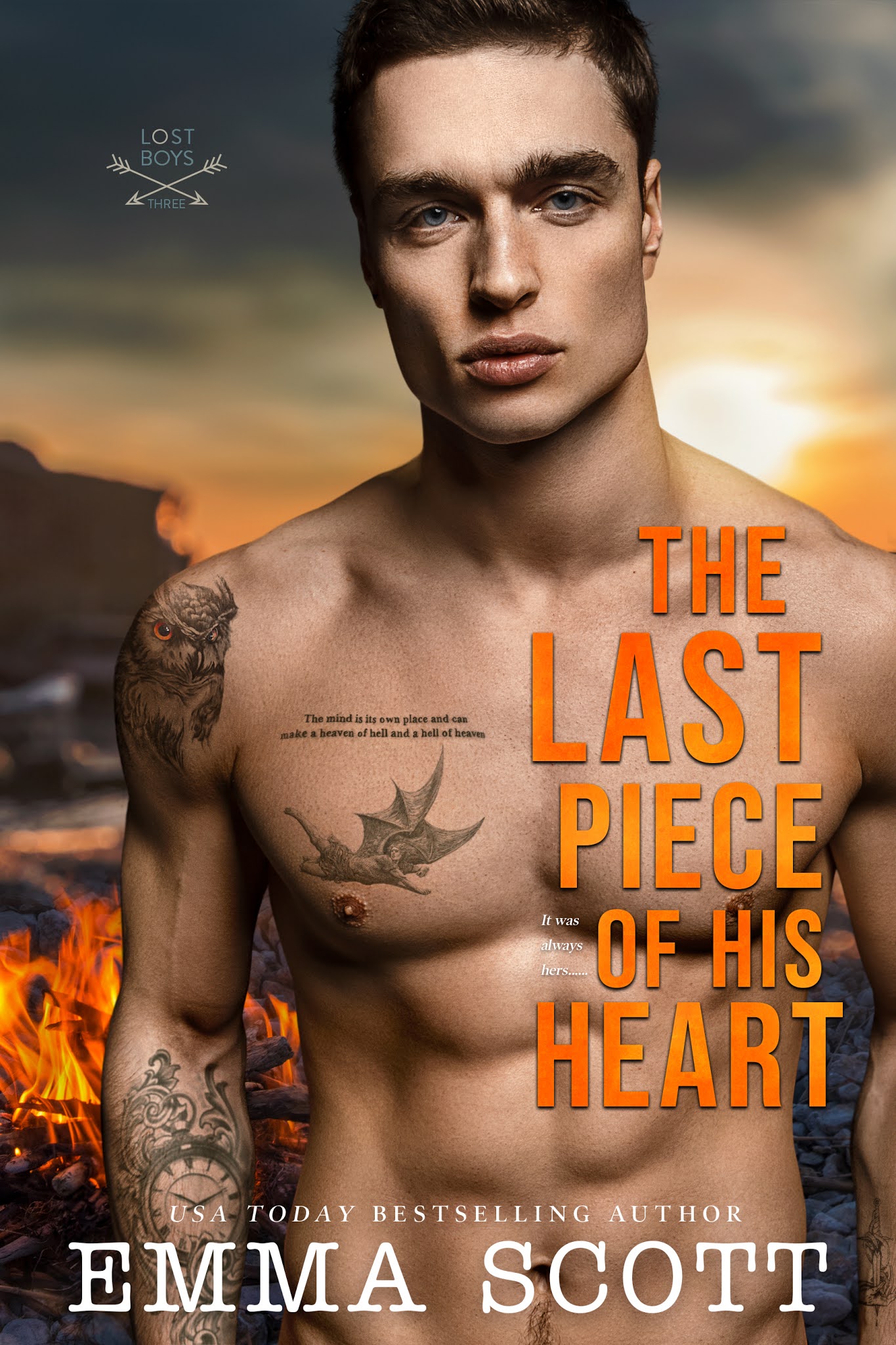 "If you could go anywhere in the world right now, where would you go?"

"There is nowhere else I'd rather be than her with you."

The Last Piece of My Heart took every piece of my heart AND soul! I honestly thought I was prepared for this book, not only because my expectations were astronomically high, but also because this was third and final one in the Lost Boys series. Past experience has already taught me that my tear ducts will get a workout whenever I've got an Emma Scott novel in my hands, but this series has proven to be even more heartrending than any of my previous reads from her--more so this last Lost Boys book! Bittersweet feels abound!
Ronan Wentz was eighteen when he found himself in Santa Cruz, California. After a decade in the foster system, he's left the horrors of Wisconsin behind but the nightmares still haunt him. He may not have a place to call home, but his Uncle Nelson has given him somewhere to stay and a job to do. He's used to being alone anyway, but at Santa Cruz Central High, he finds himself a couple of unlikely friends, both of whom he is highly protective of. However, it's seventeen-year-old Shiloh Barrera who stirs in him the same protectiveness and something more. They have their demons; can their love slay them?
You have no idea how long I've been sitting in front of my keyboard, not only because I'm having difficulty coming up with the right words to express how much this book affected and meant to me, but also because I'm dealing with a whole swirl of emotions while being bombarded by a slew of thoughts. Emma Scott outdid herself with this series in general and this series ender in particular, and it's a feat that she seems to be so darn adept at accomplishing with each new book she publishes. I wish I could easily wax poetic about all things Ronan and Shiloh and their story, but I'm pretty sure whatever I write could never come close to adequately conveying everything in my heart and head.
Among the three Lost Boys, Ronan was the quietest one, usually letting his actions speak for him. But goodness, when he spoke, it's as if the world pauses and contemplates because he truly does give those who listen to him something to ponder on. He could have very possibly survived had he chosen to remain the loner that he was in the beginning, but with Miller, Holden, and Shiloh by his side, he undoubtedly thrived. There were others as well, particularly, Shiloh's great-grandmother, Bibi, and Cliffside residents Maryann and her twin daughters, who helped push Ronan out of his comfort zone--or at least the zone that he had grown used to when he was still in Wisconsin. It felt like such a privilege to see him realize and accept that he was someone worthy of all things possible.
Then there was Shiloh, and she seriously is one of the strongest female main characters I've come across in recent memory. She had drive and ambition, but she was also masking so much hurt and disappointment, having to live with the worst kind of rejection any child could experience. But she had good people around her--Bibi, her aunt and uncle and cousin, and her best friend, Violet. When Ronan came along, she had found her person, but nothing came easily for these two. They had their struggles and they allowed their fears and insecurities get the bette of them time and again. However, once they had a glimpse of what life would be like without the other, it was like a dawning that what they had and could continue to have and share would be worth risking their hearts for. If there were two people who deserved forever, it was these two.
This series has meant such a great deal. Yes, it made me cry, but it also served as a reminder that not all who are lost stay that way. Miller Stratton, Holden Parish, and Ronan Wentz may have started that way, but they ultimately found so much more than they ever thought they were capable of having. Miller found the courage to pursue his music and to fight for Violet McNamara; Holden found his place and purpose and the former being with River Whitmore by his side; and Ronan found peace and in Shiloh Barrera he no longer had to be alone. Yes, these three best friends were lost boys, but as young men, they found love, family, home, and most importantly, themselves. I don't think it's possible for me to recommend the Lost Boys series enough. My humble suggestion would be to read it in order--The Girl in the Love Song, When You Come Back to Me, and The Last Piece of His Heart, which gets all the stars. I promise, you won't regret it.

They'd called us the outcast, the vampire, and the criminal. The Lost Boys. But we were bonded by something stronger than blood or friendship or circumstance. We were soul mates.

And not lost anymore.