Review: The Girl in the Love Song by Emma Scott (Lost Boys #1) 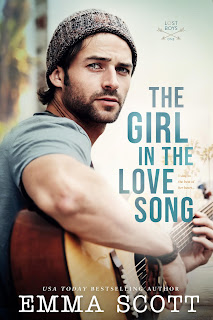 I wanted to laugh and tell her how impossible that is. How I crossed a boundary the night we met. How all the broken pieces of my life come together when I'm with her, even for a little while. How we'd been hanging out for months and and every minute I tried to find the courage to tell her that this poor homeless kid with nothing to offer would die for her.

Is it really fair for Emma Scott to make me cry as much as she did with this book while I was sick in bed?! Gah! But it was worth it because while there were moments where my heart squeezed achingly in my chest in empathy for several of the characters in The Girl in the Love Song, that very same heart thumped happily by the time I got to the last page. If this first book sets the tone and the bar for the rest of Scott's Lost Boys series, I'm both anxious and eager to find out what else awaits fans and readers like me who I know are in wonderment and basking the absolute extraordinariness of this series starter, especially since the author mentions who book two is about! Yep, totally rubbing my hands in excitement. But I'm getting ahead of myself aren't I? This is what happens when my enthusiasm gets to fangirl levels, and I can't stop myself from gushing over a story I've fallen so madly in love with.

The Girl in the Love Song opens the Lost Boys series, and we're introduced not only to the main characters of book one, Miller Stratton and Violet McNamara, but also those whom I suspect will make up the rest of the series's recurring cast of characters, Ronan Wentz, Holden Parish, Shiloh Barrera, and River Whitmore. We get Miller and Violet's story of two best friends who fall in love with each other, as well as discover how the Lost Boys got together. Miller and Violet were thirteen when they first met and formed a bond that seemed unbreakable. She's the rich girl whose parents' marriage is crumbling right before her very eyes and he's the poor boy who lives in a car with his mother, both of them abandoned by his father. On the surface, Miller and Violet may not have had a whole lot in common, but where it mattered most, these two shared a connection unlike any other. They both knew how precious it was, and they feared doing anything to sever it, even if it meant keeping their feelings secret.

At the rate that Emma Scott has been taking pieces of my heart with each book of hers that I read, I'm going to end up being...heartless. Something I've already been accused of on occasion, but that's a whole 'nother matter. This author knows how to write and she does it well. She gives us characters that we not only want to see get their happily-ever-afters but that we wouldn't mind having in our lives if they were actual people. There's a realness and authenticity to not just Miller and Violet but to their motley group of friends. Maybe the three who made up the "Lost Boys" were seen as misfits, but there's a depth to them, each having a story that demands to be told, even though these boys seemingly aren't ready to be found just yet...or maybe the one who's supposed to find them is just as lost. I'm now very much obsessed with the cast of characters here, and with Violet and Miller leading the pack, I shed tears in sympathy, gasped in shock, laughed at antics, and embraced them both in solidarity because I saw parts of myself in these two. I'd dare say Scott couldn't possibly outdo herself after this, but knowing her through her writing, she'll prove me wrong again with her next book. Five-plus stars go to The Girl in the Love Song. ♥

Purchase The Girl in the Love Song on Amazon.