Review: Meant for You by Sherilee Gray (Rocktown Ink #3) 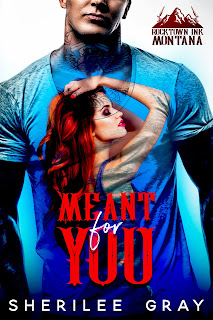 “What I want. What we were always meant to be to each other.” That steady gaze held me prisoner, going so deep I could barely breathe.

“Everything,” he said simply.


Loved, liked, and absolutely adored! Yep, that's how I felt for the three novels in Sherilee Gray's Rocktown Ink series, with the third one--which I thought would be the last, but I have a feeling it may not be or there could be a spin-off in the future, although this is total guesswork on my part--being my favorite (so far!). Meant for You is the story of Dane Calero and Everly Williams. When twelve-year-old Everly was placed in the same foster home fourteen-year-old Dane had been at for two years, they formed a bond that they swore was unbreakable. He promised her he would never leave her, and he kept that promise for eight years...until he broke it. For eighteen months, he stayed away, believing that she didn't need his anger and violence in her life. But upon his return, the bond between them was not to be denied, only now, Dane's feelings for his best friend have gone from platonic and protective to passionate and even more protective. Can he convince her that they're meant to be together, and not just as best friends but so much more? And this time around, will he be able to keep his promise to stay?

Oh wow. I thought the first two book were good, but this third one was special. I loved Dane and Everly's story because it went beyond the usual friends-to-lovers trope. There was a fair amount of angst in this one, but when I say "angst", I don't mean a drama for the sake of drama. These two went through several years of darkness in their lives, and while they both bear scars--the kind you don't see--from their experience in foster care, Dane's appear to be much deeper and the idea of those who mean the most to him being taken away is a very real fear for him. My heart went out to him because in his desperation at times to keep Everly safe, he held on too tightly and his hyper protectiveness brought out an aggression--one that has him close to losing too much. The author's writing here is even better than I could have hoped for, and with all three Caleros getting their happily-ever-afters, I wonder if a couple or so side characters here will also get their own books as part of the Rocktown Ink series or if they'll be part of a spin-off. Either way, I've got my fingers crossed for lots more! Meant for You easily garners five-plus stars. ♥

Read my reviews for the Rocktown Ink series:

Beg for You (book one) - five stars - My Review

Meant for You (book three) - stars - My Review (posted above)

Purchase Meant for You on Amazon | Apple Books | B&N | Kobo.