Review: Sin for You by Sherilee Gray (Rocktown Ink #2) 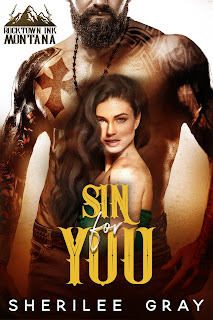 Sin for You is the second novel in Sherilee Gray's Rocktown Ink series, and it's got the falling-for-the-best-friend's-sibling vibe going for it. This is the story of Logan Calero, aka Bull, and Quinn Parker. When Quinn decides to temporarily leave behind her life in Portland, Oregon for her hometown of Rocktown, Montana, she knows she has a safe place to land. She gets a job at The Thirsty Mule, which is owned by none other than Bull, who also happens to be her older brother, Mason's, best friend. He's always been protective, but doubly so now since Mase asked him to keep watch over her. She certainly wishes that he'd see her as more than his best friend's little sister, especially since she's had a thing for him for years. But as if that wasn't enough of a hurdle, her being twenty-six and him being six years older plus being her boss has Bull knowing he shouldn't act on his attraction to her. After all, she deserves better than to be a with an ex-con like him. But when Quinn makes it clear that she's seriously into him, Bull decides to cross that line. She wants temporary and he agrees...even though he wishes for far more.

This was a really good follow-up to the series starter, and Quinn and Bull had some major chemistry sizzling between them. One of my favorite things was that the chemistry wasn't really a definite thing in the beginning of the book, what with Bull seeming to be more like a pseudo big brother. However, in hindsight, it could be quite possible that the stuff he was doing for her was also part and parcel of who he simply was and had nothing to do with brother-like protectiveness. I understood where Quinn was coming from when she declared that she didn't want anything serious with Bull, no thanks to all her exes who were asshats, thereby destroying her belief in love, romance, and "the one". There were a number of times where these two clearly needed a refresher course on the importance of open communication, but for all intents and purposes, the angst wasn't on overdrive. As for the usual complication with regards to the whole best friend angle, I loved that Sherilee Gray didn't take the obvious route, and while I know book three is about Dane, I hope we haven't seen the last of Mase. 4.5 stars for Sin for You. ♥

Read my reviews for the Rocktown Ink series:

Beg for You (book one) - five stars - My Review

Purchase Sin for You on Amazon | Apple Books | B&N | Kobo.