Review: Beg for You by Sherilee Gray (Rocktown Ink #1) 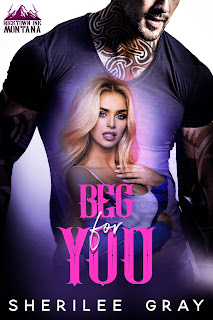 Oh, how I've missed Sherilee Gray's writing! My last read from her was her Boosted Hearts series a couple of years ago, although I do have the first three books in her Lawless Kings series on my tablet waiting to be read. She kicks off her brand-new Rocktown Ink with a romance that has revenge on the mind of the male main character. Beg for You is set in Montana and is the story of twenty-six-year-old Cassandra Deighton and twenty-nine-year-old Joel Calero. A terrible accident cost Cassy her older brother, Christopher, and left her with scars on a large portion of her body ten years ago. When she decides the time has come to cover the burns, she crosses the threshold of Rocktown Ink, and asks for Cal, a highly recommended tattoo artist. With a hulking form and scars of his own, Cal informs Cassy that there are those who see him as a monster, but she sees the man behind the facade and is drawn to him. What Cassy doesn't know, however, is that she's met Cal before. She was the ice queen who never gave him the time of day, but it's her father who left his mark on Cal and his family, and Cal plans on making him pay for what he did. Cassy is the unwitting pawn in Cal's plans, but falling in love with her was never part of them.

Beg for You was a great read, one that had a fair amount of tension to it, all courtesy of the mixed emotions swirling between the main characters, Cal and Cassy. He's had revenge on his mind for a decade, but Cassy entering his tattoo parlor and having no clue who he is was like the perfect opportunity for him to set an impromptu plan in motion. To be fair, though, Cassy was hiding her own secret from him, one that was guaranteed to cause problems for them once all the feelings getting in the way. I liked that these two were imperfect and prone to making decision without thinking of the consequences because then it made it easier to relate to them. A lot of the choices that they were making were based on their love and loyalty to family, but when everything comes to light, their physical scars hold no comparison the emotional ones that they risk leaving behind by their words and actions towards one another. With good pacing and development, this was a five-starred series starter. ♥

Purchase Beg for You on Amazon | Apple Books | B&N | Kobo.