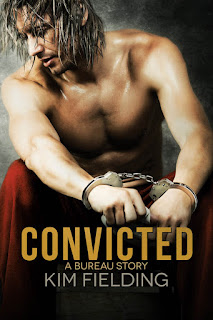 Kim Fielding returns to the enthralling world she's created in her Bureau series with the fifth story. Convicted is about Kurt Powell, a veteran of the Vietnam War who nearly broke under the weight of his addiction until he became a part of the Bureau of Trans-Species Affairs. His being an agent is what gave him focus and purpose, going after beings, whether human or paranormal, who abused the magical powers they'd been bestowed with. His newest assignment, however, has him paired up with an imprisoned convict named Desmond Hughes. He was a boy from Belfast when he was sent to the United States, but years later, he wasn't living any sort of American Dream, languishing instead in a nightmare. He's already in his seventeenth year of being incarcerated in the Bureau's "supermax" prison with no hope in sight of ever being free again. Then an agent from the Bureau arrives and needs Des to help him locate missing magical artifacts connected to Des's ex--the same person who masterminded the vicious crimes spree that led to Des being named an accomplice and his later imprisonment. Working as a team won't be easy and neither will be finding the artifacts, but on this road to redemption, both Kurt and Des may discover that while the journey will be difficult, the reward at the end could well be life-altering.

I'm rather addicted to Kim Fielding's Bureau series. They're not your typical paranormal romances and while this latest one is the closest to being novel-like in length, they're novellas that pack so much in the limited number of pages they have to offer. Each one is proof that you don't need copious amounts of chapters and pages just to weave together the sort of story that intrigues and goes beyond the expected. I enjoyed every single bit of Kurt and Des's story, and while it can well enough on its own, I do highly recommend that you read the series in order, especially because new readers will need the back story of the Bureau and you do get a clearer picture of it if you're familiar with the series. The two main characters are developed in such a manner that with each layer that's peeled away, the more emotionally invested I became in them and their story. Nothing comes easily to them, but I think the book is a reminder that while that may be true for so many of us in the "real" world as well, we can choose to either wallow or to persevere and learn from our mistakes. I've read every single one of the books in this series, and I can't wait to find out what the author will serve up next. I'm giving Convicted 4.5 stars out of five stars. ♥

Read my reviews for the Bureau series: