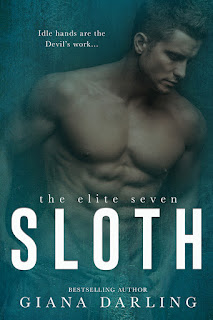 Sloth is the sixth book in the seven-part, multi-authored Elite Seven series. Penned by Giana Darling, this is the story of nineteen-year-old Rush Dempsey, a guy who couldn't care less about much of anything or anyone. He's had a life of privilege but he isn't motivated much to do anything with his life. That is, until his father gives his a mission--a purpose for him to latch on to. Rush is to enroll at St. Augustine and become a member of the Elite, an exclusive group with a whole lot of power that they use to manipulate others. The task assigned to Rush as part of his initiation is to seduce twenty-four-year-old Isabelle Savoie, the daughter of the Archbishop of New Orleans and the administrator of St. Augustine's Cathedral. It sounds easy enough and defiling the pious Isabelle shouldn't be too much of a hardship, but Rush never counted on Isabelle changing his entire world. However, what the Elite wants, the Elite gets. What is Rush prepared to do in order to protect what he and Isabelle are creating together?

I'll be honest: this book fell way short of my hopes for where the series would be six books in. This is the second to the last book and I was hoping to get more answers as to the series arc concerning the mysterious Elite; instead, I ended up rather confused and somewhat disappointed. Rush was an enigma in the first five books, and while he had a pretty interesting back story, the whole insta-everything regarding his relationship with Isabelle took away the usual feeling of tension and anticipation the earlier books had. I also happen to have my own thoughts about a Catholic archbishop openly having a daughter--which isn't allowed in the Church considering an archbishop is one of the highest ranks in the clergy and priests in general are supposed to be celibate and remain single. I get the whole the blasphemous Rush being the antithesis of the pious Isabelle and how they end up coming together in spite of that, but I struggled with this book more than the others, which is why I ended up giving Sloth three stars. ♥