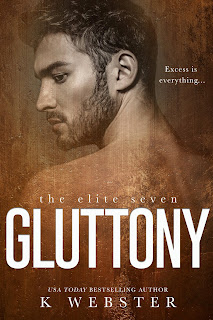 Note: An advanced reader copy (ARC) was provided the author.

Gluttony is the fifth book to be released in the multi-authored Elite Seven series. Penned by K Webster, this book is all about Baxter Samuel Goddard V, aka God, who I've been most curious about from the moment he made his first appearance as Rhett Masters's best friend in the series starter, Lust, which was written by Ker Dukey. God is an eighteen-year-old who's known what awaits him as an adult from the moment he understood what his last name stood for. He's always lived in the lap of luxury and he reaps the benefits of the lifestyle his parentage his afforded him even if he does have an overweight father ready to keel over and a mother who loves her alcohol a wee bit too much. When he's given his spot as part of the new batch of Elite members, his task seems easy enough: steal his best friend's mother's BMW. But then God runs over Zemira Coleman, an eighteen-year-old orphan and scholar at St. Augustine's, the same university God attends. It would be too easy make his crime go away--to make Zemira go away--but God refuses to do so.

You know how you have really high expectations because this character has been such a presence in the previous books? That's how it was with God, and yes, for maybe the first few chapters, God was definitely living up to those expectations of mine, but then that vested interest of mine waned during most of the book only to bounce back by the end. I know, I know--that sounds weird and all. I liked God and I appreciated that there was more to him than being some spoiled rich kid who thought his nickname of "God" gave him permission to think he was god and master of all he surveyed, although if we're being honest here, the guy really did have a whole lot of power at his fingertips thanks to his family name. A number of loose threads were kinda-sorta-maybe tied up here, and I'm guessing that's because this was originally supposed to be the second to the last book in the series until unforeseeable circumstances mixed things up a bit. While Gluttony is not my favorite among the Elite Seven books, I still enjoyed it at four stars. ♥