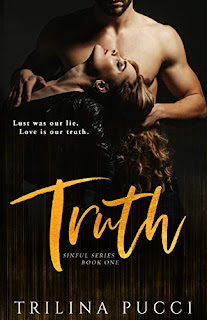 I love freebies. I mean, come on, who doesn't? When a book is up on Amazon or one of the e-retailers for free and the synopsis calls to me, of course I'm going to one-click it. I've amassed a collection over the years, although admittedly, I've barely made a dent in said collection. However, while freebies are nice and all, nothing beats a freebie that happens to exceed my expectations for it, and that was exactly what Truth was. This is the first book in the Sinful series penned by Trilina Pucci, and it's my introduction to this particular author who came highly recommended in a public relations company's Facebook Group. Now, I've been disappointed by books and authors that have come to me through recommendations--who hasn't?--but I'm happy to say, Pucci's series starter scored.

Truth is the story of thirty-one-year-old Drew Matthews, a woman who's life is on an upswing, thanks to a promotion and meeting a great guy. Fast forward a year later and Drew and her boyfriend seem to be destined for heartbreak, that is, if she really did still have heart invested in the relationship. During a bachelorette weekend she was forced into, Drew finds herself in a sex club, and while her attention is on everything happening around her, she's managed to snag the attention of a powerful man known for getting what he wants--and Dominic King wants her. The forty-year-old doesn't do love and commitment, but when the twenty-four-hour limit they've put on their encounter draws to a close, he realizes he wants more. The question is: does Drew want the same thing he does?

Full disclosure: I went into this book blind. When it was offered up for free on Amazon, I knew the timing was right because I was set to read and review the upcoming second book, and I happen to be the sort of reader that likes to read books in a series in order. I was a tad unsure during the first few chapters because Drew was with some other guy named Nick, and I thought, "Oh, maybe it's a nickname for 'Dominic'." Well, that was cleared up the moment Dom stepped into the picture, and from the moment on, the connection that he and Drew had was palpable and had me absolutely focused on them and the intensity they shared. I honestly liked the direction the story went in and that these two had to fight for what they ultimately wanted. Truth was a 4.5-starred stellar surprise of a read. ♥