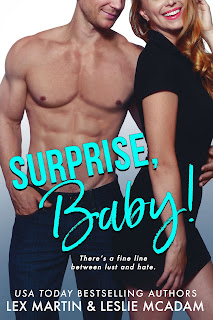 Surprise, Baby! is the second release from the writing duo of Lex Martin and Leslie McAdam, and it's a follow-up of their initial offering from 2017, All About the D. This book definitely turned out to be a surprise because I liked it much more than I did its predecessor, with a witty enemies-to-lovers story and main characters who had banter and chemistry down pat. While you don't necessarily need to read All About the D, Drew Merritt and Kendall Greer--best friends of Josh Cartwright and Evie Mills, respectively--were introduced there and it'll help give new readers an idea of how different Drew was back then and why Kendall doesn't have a great opinion of the old him.

Drew Merritt version 2.0 may be hot as hell, but Kendall Greer is still stuck on her first impression of the guy, none of which were really all that positive. She may not think too highly of him, but Drew can't seem to stop himself from crushing on the woman who's made it clear she wants nothing to do with him. Getting stuck together in a cabin, however, has Kendall being less hostile towards Drew, enough that it becomes clear that they've got a whole lot of sexual chemistry. What happened on that mountain stays on the mountain, until Kendall discovers something more life-changing than not hating Drew...something that's due to come in less than nine months' time.

I've had a soft spot for Drew since I met him in his best friend's story, and it was nice seeing how much more put-together he was here. Kendall may have come off as somewhat of a hardass, but there was a lot more to her than the go-getter of a professional woman that she was. The two of them together made for some very funny moments, especially with all the back and forth they had going on. Seeing their relationship develop from being two people who didn't seem to have a whole lot of affection for one another (mostly from Kendall's end) to actually realizing that they click in more ways than one made Surprise, Baby! a fun-filled 4.5-starred rom-com read. ♥