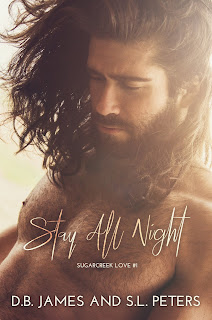 Stay All Night is the first book in the Sugarcreek Love series co-authored by D.B. James and S.L. Peters, and it's the story of Tobias Roman Jefferson, high school dropout and animal shelter owner, and Janie Lynn Francis, the town's new veterinarian. Years ago, Tobias had nursed a very secret crush he had on Janie Lynn, a crush that survived even as his older brother began to date her. It was around that same time that Tobias did something that would change the course of his life, and it’s a decision that haunts him almost two decades later. On the other hand, Janie Lynn left their hometown to go off to college, and now she’s returned to take over the local vet practice. With him having an animal shelter, Tobias knows that he’ll be crossing paths with Janie Lynn sooner rather than later and often. He may have missed his chance when they were teenagers, but Tobias intends to get his shot with the woman he’s always wanted…but will she shoot him down?

This series starter held some promise, and in terms of the story line, it lived up to it. When it came to the execution, it did falter a bit, at times feeling as if there was a whole lot of rambling going on. The speed in which it took the main characters to go from kinda-sorta-maybe acquaintances in high school to meeting again in their mid-thirties and trying the dating thing and quickly falling in love felt oddly rushed. Tobias was doing this back and forth thing with her, where he would be all alpha by taking charge and telling her they’d go on a date rather than asking her so that she wouldn’t have a chance to refuse and then he’d back off because he didn’t feel worthy got tiresome after a while, as did his being pissed with his brother time and again but not really taking a stand and allowing himself to be used. For a smart guy, Tobias should have known better but oh well. So, while Stay All Night was an okay read, it fell short of my hopes and expectations. Three stars. ♥

Purchase Stay All Night on Amazon.