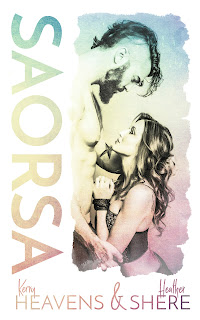 Saorsa is a contemporary romance read from Kerry Heavens and Heather Shere set in London. I've read and loved Heavens's work in the past and I liked Shere's debut release a couple of years ago, so I'm definitely not new to their writing, and I was curious to see how they would combine their talents on this new standalone (which kind of feels like it has potential for a spin-off or three, thanks to a great cast of supporting characters, but more on them later). I had high hopes for this one, but alas, it fell rather short.

Charlotte Rose is a woman ready to leave behind the life she once had in New York and begin anew in London. She quickly lands the job she's had her eye on, but pretty soon, she's back to the way things were, with work coming first and everything else second. But then a man named Rhys comes along--a man she met upon arriving and seems to pop up anywhere and everywhere. Rhys lives his life freely, guided by the definition of "saorsa". Charlotte doesn't know how not to be in control, but maybe Rhys can show her how.

This book really was Charlotte's story to tell, but I found it difficult to connect with her, making it nearly impossible to become invested in her happily-ever-after. She came off as somewhat cold and even her relationships with other people didn't feel as deep as they were supposed to be. If I'm being perfectly honest, I much preferred the supporting characters in the story--and yes, I'm including Rhys in that group because he didn't really feel like a main character to me--so I'm hoping Michael, Connor, and Louise get their stories told as well, especially Michael because I felt like he deserved to have his own happy ending.

I think that my biggest issue with this book was that it lacked romance. Now, that doesn't mean that every single book I read requires romance since I do read other genres. However, because this book is categorized as contemporary romance, naturally, I'm going to be looking for those things that inspire me to think of romantic love. It also felt as if there was supposed to be a twist of sorts regarding one of the characters in the story, but from the get-go, I knew who they were so it became a non-revelation. But yeah, the story and its main character left me wanting, so as much as it pains me, I'm giving Saorsa three stars. ♥