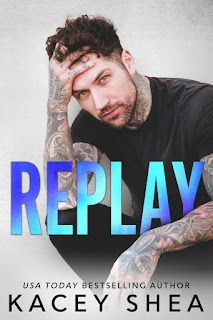 Replay is the fourth and final novel in the Kacey Shea-penned Off Track Records, and it's a story about getting second chances and finding one's first true love. Austin Jones is the lead guitarist for 3 Ugly Guys--aka 3UG--and he's the last single guy in the band. He's never had any problems snagging any woman of his choosing but he can honestly say he's never been in love. And then Jayla Miller walks back into his life. She a no-nonsense security specialist who gives back just as well as she takes, and she has no qualms putting Austin in his place. Maybe their history together plays into that, after all, Austin and Jayla were once best friends, and she knew him before fame and fortune came into the picture. Now that he has an opportunity to rekindle their friendship, Austin finds that he wants something else with Jayla... He wants so much more.

Although this book is a standalone, I think that reading the series in order makes for a far better and more enjoyable reading experience. You will, however, still be able to read this fourth and final book without worrying too much of something doesn't make a whole lot of sense. Austin and Jayla are former best friends who are back in each other's lives, and I liked seeing them trying to navigate their way around not exactly being these super close, still in contact buddies who are going to be falling in love with one another. There had to be a whole lot more when it came to reconnecting and reestablishing a stronger relationship.

One of my favorite things about this book had to Jayla. I love stories that have female main characters who have empowered themselves through experience and circumstance. Jayla refused to let herself get bogged down by life's less pleasant encounters. She isn't bitter--she's made herself better through everything that's passed her way. I think she was the perfect person to be with someone like Austin. She saw beyond the persona and saw the boy who had become a man. He didn't need to constantly be on-point with her. She got him--the real him--and vice-versa, and their rekindling their friendship always felt like it was something that was just waiting to happen so that they could evolve into much more. Replay was a fun four-star read. ♥