Review: Only Ever You by Siobhan Davis 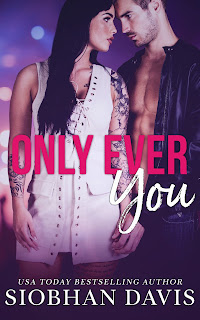 Only Ever You is the new standalone from Siobhan Davis and I can't believe I'm about to say this but...it had too much angst. I know, I know! It's a shocker coming from a self-confessed angst addict like me, but you know how they say that too much of anything is a bad thing? Well, that was the case here. The book's prologue sets the tone, and what follows is the first part of the story wherein the main characters, Zeta Williams and Ryder Stone, meet in juvenile detention at the ages of sixteen and seventeen, respectively. They form a one-of-a-kind bond, becoming the best of friends before becoming each other's first love. Ryder leaves juvie at eighteen first and Zeta follows months later, but any plans they had for a future together are thrown to the wayside when Ryder abandons her with nothing more than a letter. Part two of the story is set eight years later. She's a music journalist and he's part of a world-famous rock band, Torment. They've always been aware of each other's existence but have avoided crossing paths until fate intervenes and some good ol' manipulation. The love is still there, but will it be enough?

There are things about this book that may be considered no-gos for some readers, particularly when it comes to the heinous act that occurs at the very beginning. I can't say exactly what happens but suffice it to say that it was a horrific event that plays a huge part in why Ryder is the way he is throughout the rest of the book. This has twists and turns, most of which I pretty much saw coming and a couple that left me gobsmacked. I'm all for drama and heaviness, and if I'm being honest, the crime that happens in the beginning wasn't what has me waffling about my overall feelings for the book. It had to do with the second part of the story. I get that Ryder experienced a great deal of trauma, but it was almost as if every single that could amp up the drama was thrown in, waiting to see which would be the thing that breaks him most. And ugh, I know Zeta mentioned she didn't see the point in playing games, but she had a bad habit of quickly excusing Ryder's bad behavior time and again. There were things also that were brought up and then never resolved, so as much as it pains me, I'm giving Only Ever You three stars. ♥

Purchase Only Ever You on Amazon.