Review: One & Only You by Tabatha Vargo & Senna Daniels 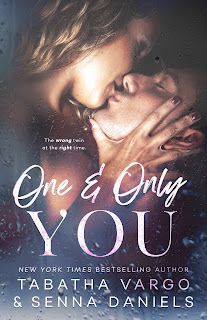 One & Only You is from the writing duo of Tabatha Vargo and Senna Daniels, the former who is a new-to-me author and the latter a debut author. This is basically the story of one twin taking the place of the other twin right before they're set to be married. Addison Banks and her twin sister Allison have traded places in the past, with Addy usually stepping in whenever her sister needed her to. It's all fine and dandy but taking over as the bride is something totally different. Allison tells Addison that she can't marry Wyatt James, and Addy knowing that this marriage is what will help their ailing father get the expensive medical treatment he needs has her agreeing to the hare-brained scheme. Addy was ill-prepared to be around Wyatt, the guy she's been crushing on since she was a kid. From bride to wife, Addison falls into her role, but what happens when Allison decides it's time to switch back?

In order to full enjoy this book, a suspension of disbelief is a must. Unfortunately, there's only so much of that I can do. It's pretty obvious that the whole twin switching thing could only last for so long, and I get Wyatt not immediately noting the differences between Addison and Allison, but are you seriously telling me that even the twins' parents had no way of telling them apart? REALLY?! And as much as I liked Addy, the girl desperately needed to grow a backbone. I have four siblings and I would never allow any of them to take advantage as much as Addy allowed Allison. Speaking of the evil twin, there really wasn't much in terms of resolution as far as she was concerned, but this writing duo does have a second book slated for release next month, so maybe that's it? No clue. So, as promising as the blurb may have been, One & Only You fell way short, resulting in a three-starred read. ♥

Purchase One & Only You on Amazon.