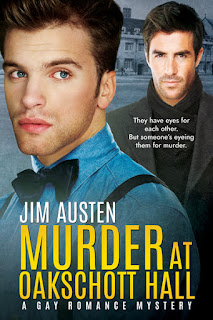 Murder at Oakschott Hall is Jim Austen's debut release and it's a story with elements of romance, mystery, and suspense. Going into the book, I had no idea that it was a mash-up of sorts using a detective story penned by acclaimed English novelist and screenwriter James Hilton of Lost Horizon and Goodbye, Mr. Chips fame. Hilton's book was originally published in 1931 under a pseudonym and the title Murder at School, and was later released in the United States under a new title, Was It Murder?, and remains the writer's lone foray into the genre. Having never read this particular Hilton book, I can't really tell you which parts, if any, were inspiration for Austen's novel.

When a student is killed by a falling gaslight, it would be understandable to assume it was nothing more than a terrible accident. However, to avoid any sort of negative attention, the headmaster of Oakschott Hall decides to call upon an alumnus of both Oxford University and Oakschott, Colin Revell. As he quietly investigates, Colin crosses paths with teacher named Max Lambourne suffering from his experiences during World War I. Colin and Max form an unexpected bond and summarily fall in love. In the midst of their fiery affair, another student is found dead, and this time, there is no doubt of foul play. Will the killer be caught before they Colin and Max become victims, too?

While it was rather easy to figure out who the villain was in this story, I quite appreciated the author's writing style and his ability to nicely balance out the romance and mystery aspects of Colin and Max's tale. Although the two men seem to quickly jump in to a physical relationship, the development of the more emotional part of their coupling was better paced and the connection between them came off as more lasting. I'm not entirely sure if reading the James Hilton's 1931 detective novel will allow readers a better appreciation for the efforts Jim Austen put into his own work, but as far as I'm concerned, Murder at Oakschott Hall does stand well on its own. 4.5 stars. ♥