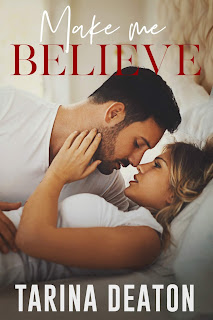 Tarina Deaton is a new-to-me author, although I have seen her work on Goodreads and as part of a multi-authored collection of stories in an established book universe. Her newest book is the first in a duet entitled Jilted, with the focus being on the bride who was left at the altar. Now, that may sound like the usual bride being abandoned by her groom for another woman, but trust me, that's not what Make Me Believe is actually about. This is a second-chance romance, but the second chance has nothing to do with the bride and groom slated to exchange vows; instead, this second shot at love and a happily-ever-after involves a country music star and the girl whose heart he broke just as his star was rising six years ago. When singer-songwriter Luke Stone learns that his ex-girlfriend is about to get married, he decides the time has come for him to make a stand and win back the only woman he’s ever loved, but what will it take for Rowan Mitchell to believe him?

For the most part, Make Me Believe was a good read, with likable enough main characters and an entertaining, if not wholly original, story. The idea that Luke suddenly realized six years after everything between him and Rowan that he was going to fight for her was a tad unbelievable, especially since he didn’t really do much of anything to go after her other than call her a number of times after they broke up. Showing up at her wedding and trying to put a stop to it didn’t endear him to me either, but it was certainly interesting to see how everything would play out from that point forward. Rowan’s friend Maria was, well, one heck of a pot-stirrer who thought herself a psychi matchmaker. As for Rowan, I honestly admired her for standing up to Luke and not giving in to him, but then that lasted for all of a few pages and then everything played out the way it plays out in other books with a similar theme. The most notable things about the book were the epilogue and the groom, Michael, so while not originally creative, Make Me Believe was enough of a 3.5-starred read. ♥