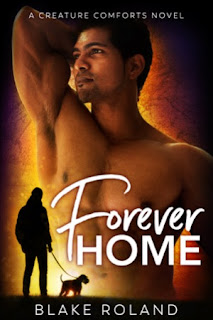 Forever Home is the first in the Creature Comforts series and it's my first read from Blake Roland. I'm easily swayed into saying "yes" to books that make use of animals as more than mere accessories in the story, so when I read the blurb for this series starter, I knew I'd have to give it a shot. The book is about Luis Russell and Samir Mannan, the younger man having been rejected by his family and the older man having lost his husband. Luis has found purpose in his work in a struggling no-kill shelter but his family's rejection and getting thrown out of the only home he's ever known at eighteen continues to have him questioning his self-worth. On the other hand, Sam still mourns the man he loved and lost two years ago, and his family worries about his ability to truly move forward. Both Luis and Sam meet during a charity auction, and the connection they share is palpable. But Sam feels guilty, making him ill-prepared to make a true go with Luis, leaving Luis vulnerable to his insecurities. Is there hope for these two to find forever and home together?

There were definitely parts of the book that I loved, particularly anything and everything to do with the character that stole my heart: Rufio. Yep, a senior dog won me over, but if you know me personally, then this shouldn't really come as a surprise. I may have liked Luis a smidgen more than I did Samir, but a lot of that had to do with Sam giving off a colder vibe than the more sensitive Luis. The supporting characters certainly deserve a lot of kudos because they did help in making this a more entertaining read, and there were a couple of them that I hope will get their own happily-ever-afters as the Creature Comforts series moves forward. There were moments where the flow of the story did falter a bit, and it did take me longer than I had expected to fully feel engaged in the story and its characters. So, Forever Home garners 3.5 stars. ♥